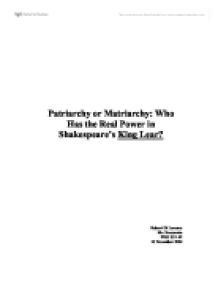 Patriarchy or Matriarchy: Who Has the Real Power in Shakespeare's King Lear?

In my true heart / I find she names my very deed of love, / Only she comes too short, that I profess / Myself an enemy to all other joys / Which the most precious square of sense possesses, / And find I am alone felicitate / In your dear Highness' love. (Lr. 1.1.70-8). Di Lorenzo 3 In this, both sisters show their ruthlessness to gain power and control. They do not care whether they are telling the truth or not. All that matters is if they gain the power of land. In an attempt to gain more control, Regan is the first to openly betray Lear. She, with the aid of Goneril, wishes to throw Lear out of his own house so that she may rule without his influence. Throwing her own father out into the cold shows her masculine callousness. Regan also takes part in the blinding of Gloucester and kills the outraged servant with a sword. Swordplay is something never done by a proper lady, yet in this case, the role reversal proves Regan righteous to kill the servant. Goneril's bid for power causes her virtuous and gentle husband, Albany, to turn on her. ...read more.

In her role as Queen of France, Cordelia takes hold of the power to lead the French army into Britain to overthrow the rule of her two ruthless sisters. When she accompanies her army into battle, she, unfortunately, is captured and hung. Lear, finally coming to the realization that Cordelia, his favorite daughter, was the only one who truly loved him, dies out of grief from her death. And my poor fool is hanged! No, no, no life! Why should a dog, a horse, a rat, have life, And thou no breath at all? Thou'lt come no more, Never, never, never, never, never! ... Do you see this? Look on her! Look! Her lips! Look there, look there! (Lr. 5.3.305-310) Lear's death marks the proof of Cordelia's ultimate role as a matriarch. Shakespeare undoubtedly contradicts the social order that has been historically prevalent; that of patriarchy ruling the world. He has reversed the roles of society so that the women in King Lear are the ones in ultimate power. They, though non-existent at the end of the play, exhibit the most influence among any character. The women in King Di Lorenzo 5 Lear cause death, insanity, confusion, marriage, divorce, war, disguise, banishment and hate. ...read more.