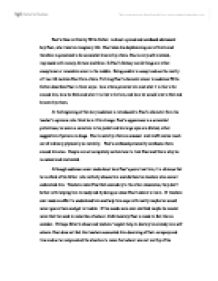 Paul's Case written by Willa Cather is about a proud and confused adolescent boy Paul, who lives his imaginary life. Paul takes his daydreaming out of limits and therefore is perceived to be somewhat bizarre by others. Paul is very self oriented, impressed with money, fortune and fame. In Paul's fantasy world things are either exceptional or miserable never in the middle. Being unable to accept and see the reality of true life isolates Paul from others. To bring Paul's character closer to audience Willa Cather describes Paul in three ways: how others perceive him and what it is like to be around him; how he feels and what it is like to be him; and how he would love to feel and be seen by others. At the beginning of the story audience is introduced to Paul's character from his teacher's opinions who think he is little strange. Paul's appearance is a somewhat pretentious; he wears a carnation in his jacket and his large eyes are dilated, rather suggestive of person on drugs. ...read more.

Perhaps father's abuse and teachers' neglect help to destroy his already low self esteem. Paul does not feel like teachers accounted him deserving of their company and time and so he reciprocated the situation to mean that school was not worthy of his company and time. In order to escape miserable reality he starts to live his own lie and "believes" that he is better than anyone else. Paul detests his home, the street that he lives on and his school. The descriptions of school and home by Paul are ultimate dullness. He feels that in his classroom he walks on bare floors, sees naked walls, and he listens to teachers in ugly gowns. Paul pictures his home in deteriorated colors: "horrible yellow wallpaper" and "creaking bureau" and it becomes clear Paul is not fond of his house either. However when readers get to know Paul at Carnegie Hall where he works as an usher after school, they get to know Paul's true love of life. ...read more.

He buys clothing he knows rich and famous ware, rents a room at the Waldorf and becomes a true citizen of his dreams. For eight days of his life Paul makes his imaginary life transform into reality. He drinks champagnes and rides in carriages, "he could not remember a time when he had felt so at peace with himself." This is the type of life he lasted after and this is the person he wanted others to know he was. Even though Paul is happy and at peace, he knows all good things must come to an end. When Paul realizes that he has to go back and live his ordinary life again, his heart and soul cannot convey the impact of such a climactic transformation. Paul understands he has to face his father, truth will come out, his imaginations would be conveyed as lies, and he would never again live in such luster. As Paul jumps infront of train and faces death he is still thinking about the nice things he will never do and about the life he will never live. ...read more.