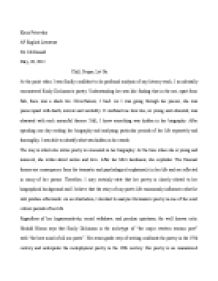 ﻿Elena Petrevska AP English Literature Mr. McDonald May, 20, 2012 Chill, Stupor, Let Go. At the point when I was finally confident to do profound analysis of any literary work, I accidentally encountered Emily Dickinson's poetry. Understanding her was like finding that in the sea, apart from fish, there was a shark too. Nevertheless, I tried. As I was going through her poems, she was preoccupied with death, sorrow and mortality. It confused me how she, so young and educated, was obsessed with such mournful themes. Still, I knew something was hidden in her biography. After spending one day reading her biography and analyzing particular periods of her life separately and thoroughly, I was able to identify what was hidden in her words. The way in which she writes poetry is concealed in her biography. At the time when she is young and innocent, she writes about nature and love. After her life's harshness, she explodes. The funereal themes are consequence from the traumatic and psychological explosion(s) in her life and are reflected in many of her poems. ...read more.

Actually, through her poems she releases herself from the anxiety and sorrow she feels. At the beginning of 1861, there exists some hope that she will surpass this period; and at the same time, she writes the poem ?Hope? is the thing with feathers(254). In this poem, she still believes that ?[she] ha[s] heard?(9) the hope ?in the chillest land?(9) and that it ?never stops? (4). At this point, she feels optimism and ?sweet[ness]?(5) about the world and herself. The optimistic consciousness causes the lack of dashes in this poem, which is strikingly remarkable. Their over-usage is recurring in her way of writing as a symbol of intensity and uncertainty; and they are omitted now. She metaphorically uses the ?bird?(7) and its characteristics like ?the feathers?(1) and the ?sing[ing]?(3) to create a sense of freedom and pureness in her soul that live inside herself. At one point, they are meant to liberate herself form the tension she feels from her lifelong traumatic experience. However, the reality is much harsher than what it seems. Instead of a continuation of her optimism , the ?hope? is buried on the ?funeral?. ...read more.

This sentence is the fundamental for her condition. It explains that ?first? it is ?chill?(13), as in the ?chillest land?(9) in the poem ?Hope? is the thing with feathers(254); then, it is ?stupor?, as the unconscious state in which she is in I Felt a Funeral, in my Brain (280); and at the end comes the ?letting go?(13) in After great pain, a formal feeling comes (341). The preoccupation with themes like death and mortality is consequence of the horrifying and traumatic experiences of watching newborn babies and the closest relatives being buried next to her house. These events, except for creating a lunatic and psychopath from herself, are the reason for her astonishing and vanguard way of writing. If only after these events Emily Dickinson has the ability to write 365 poems in one year, does that mean that in order for a poet to be avant-garde and peculiar as her, he should either be insane or traumatized throughout his life? This is the fundamental question that goes along with the biography of poets like herself. Edgard Allen Poe's manic-depressive disorder, Sylvia Plath's bipolar depression, and Walt Whitman's bipolar disorder are further evidence of how these authors' biographical background leads them to vanguard and peculiar way of writing. ...read more.