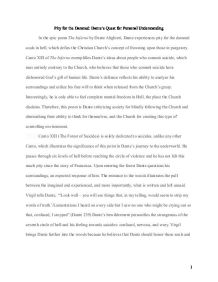 Pity for the Damned. In the epic poem The Inferno by Dante Alighieri, Dante experiences pity for the damned souls in h**l, which defies the Christian Churchs concept of frowning upon those in purgatory. Canto XIII of The Inferno exemplifies Dante

Pity for the Damned: Dante's Quest for Personal Understanding In the epic poem The Inferno by Dante Alighieri, Dante experiences pity for the damned souls in h**l, which defies the Christian Church's concept of frowning upon those in purgatory. Canto XIII of The Inferno exemplifies Dante's ideas about people who commit suicide, which runs entirely contrary to the Church, who believes that those who commit suicide have dishonored God's gift of human life. Dante's defiance reflects his ability to analyze his surroundings and utilize his free will to think when released from the Church's grasp. Interestingly, he is only able to feel complete mental freedom in h**l, the place the Church disdains. Therefore, this poem is Dante criticizing society for blindly following the Church and diminishing their ability to think for themselves, and the Church for creating this type of controlling environment. Canto XIII (The Forest of Suicides) is solely dedicated to suicides, unlike any other Canto, which illustrates the significance of this point in Dante's journey to the underworld. He passes through six levels of h**l before reaching the circle of violence and he has not felt this much pity since the story of Francesca. Upon entering the forest Dante questions his surroundings, an expected response of him. ...read more.

A soul resumes to explain what happens to their bodies when they arrive in the seventh circle; they are treated like a rotten piece of meat that not even a dog would eat. Their bodies are flung without care into the forest, no specific place chosen, and it fastens down to sprout roots and grow into the thorny, horrifying mess they stepped in to. In a sense, the way the bodies are treated is another form of punishment. Since they went astray from God's plan, they are treated accordingly. Furthermore, once the thicket grows wild and big, The Harpies, terrifying creatures who live in the forest of suicides, feed on the branches housing the souls, meaning their punishment is endless pain so they never forget the feeling of suicide. Out of the blue two souls come running towards them, this encounter further reveals Dante's character. The souls are consciously running to their deaths with yearning and run into a thorn bush where a dog mangles the bodies and runs away with their limbs. Following straight after the event Dante and Virgil approach the bush the souls ran in to, as it was crying (247). Through this particular instance, Dante comments on the importance of nature in human life. ...read more.

Dante's grief throughout Inferno raises the issue of God's Divine Justice and if his punishments are fair. By questioning God's power, Dante puts himself out on the line and forces the reader to question God as well, aiming to alleviate the pressures of the Church on the individual and allowing one to think for one's self. Although Dante concludes that the crime fits the punishment, he shows remorse for the souls. His remorse sprouts from his acute awareness of his surroundings and understanding of his standing on earth. Without reading Inferno through Dante's eyes, the reader could not have comprehended the importance of each circle of h**l for him. Not only is Dante's journey a trip to the underworld; it is a journey to find himself. The opening lines of the epic poem illustrate his internal unrest by describing the "dark wood" where his path was lost (3). Entering each circle of h**l means a learning experience for Dante and a chance to figure out who he is and where he wants to go in life. By Canto XIII his evolution is evident. Instead of collapsing from pity, he overcomes his emotions and allows himself to interact with the nameless soul. Dante has matured since entering Limbo, which benefits him in as he descends deeper into h**l because he has the chance to analyze the soul's situation and connect further, rather than assuming the role of the fainthearted. ...read more.