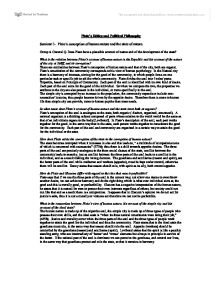 Plato's Ethics and Political Philosophy Seminar 3- Plato's conception of human nature and the state of nature. Group 4. General Q. Does Plato have a plausible account of nature and of the development of the state? What is the relation between Plato's account of human nature in the Republic and his account of the nature of the city at 368ff, and its corruption? There are similarities between Plato's conception of human nature and that of the city, both are organic. Plato's constitution of the community corresponds to his view of human psychology. In the Natural city there is a harmony of interests, aiming for the good of the community, in which people focus on one particular task or specific job to aid the whole community. Plato divides the soul into 3 roles/ parts- Tripartite, based on Principle of Contrariety. Each part of the soul is identified with its own kind of desire. Each part of the soul aims for the good of the individual. ...read more.

The guardians and auxiliaries (reason and spirit), are the better parts of the soul while craftsmen and workers (appetite), must be kept under control, otherwise there will be conflict. Kenny states that reason should rule, with spirit as its ally, both control appetite. How do Plato and Glaucon differ with regard to the idea that man is perfectible? Plato says that if we use the three parts of the soul in the correct way, not allow one desire to over throw another desire, we can achiever harmony and do the right thing which is what ever individual aims at, the good and this is morally good, or perfectibility. Glaucon has a negative interpretation of the human nature, he states that it is natural for men to pursue their own interests regardless of others, but society could not run like that and as a result there is a compromise. It appears that in Glaucon's opinion we do not act for justice's sake, thus it is not a morally or virtuous act therefore we can not be perfectible. ...read more.

It also takes into account the possibility of internal conflicts, or Plato's theory of weakness of will which leads to distinguishing different desires and the tripartite soul. It also takes into account conflicting desires in both human nature and the state of nature, which allows for the principle of contrariety to apply. It is usually the case that our ability to use reason to make a decision is far greater than using appetite, but these desires can conflict due to the tripartite soul, which makes weakness of will possible. However, Plato does not take into account other possibilities such as all members of the state acting morally. The three divisions in the state may act for the good of the state but that does not mean they will always act morally automatically. It does not take into account the possibility of an unjust ruler. Another question that must be asked is, does your ability to reason always lead you to do the moral action? And will you always act on that moral action? ...read more.