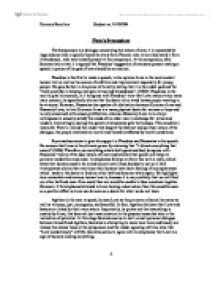 Plato's Symposium The Symposium is a dialogue concerning the nature of love, it is recounted by Appolodorus who originally heard the story from Phoenix who in turn had heard it from Aristodemus , who was himself present at the symposium. At the symposium, after Socrates late arrival it is agreed that Phaedrus' suggestion of everyone present making a speech in praise of the god of love should be carried out. Phaedrus is the first to make a speech, in his opinion Love is the most ancient human trait as well as the source of ambition and improvement especially for young people. He goes further in his praise of Love by stating that it is the oldest god and the "most powerful in helping men gain virtue and blessedness". (178D) Pausanias is the next to give his account, in it he agrees with Phaedrus' view that Love makes virtue mans main concern, he specifically claims that the desire to be loved leaves people wanting to be virtuous. However, Pausanias also speaks of a distinction between Common Love and Heavenly Love, to him Common Love is a mans physical desire for women or boys and is only concerned with s****l gratification, whereas Heavenly Love is in a boys willingness to s******y satisfy the needs of an older man in exchange for virtue and wisdom. ...read more.

Therefore it is deduced that Love cannot be wise, beautiful or indeed the Good, but can be the desire for beauty, wisdom and the Good. Consequently, we are told that Love is the desire to see beauty in its most true and absolute form, which can only be accomplished through continued philosophical study of the realm of the forms. At this point to a first time reader the way in which Plato wrote this dialogue can be better understood. To begin with there were many inferior speeches, with everyone present trying to explain the true nature of Love. Diotima's account as told by Socrates encompasses and surpasses everything that has previously been said. For example, she agrees that love has a dual nature in that it takes its roots in need but can cause great feats of human achievement. So, some might wonder why the previous speeches were included in the Symposium, however, it is apparent that Plato wants the reader to see the very essence of Socrates speech played out within the dialogue itself. The inferior speeches are justified as an example of the philosophical pursuit of knowledge. The fact that Plato chose to represent Diotima only in the memory of Socrates is of great importance, this makes her seem to exist in a separate reality to those at the Symposium who in turn exist in the mind of Apollodorus who only knew of the Symposium through Phoenix who heard about it from Aristodemus. ...read more.

It gives the reader an in depth look into the world of philosophy as well as the opportunity to delve further into the issues present in the dialogue. Plato obviously intended the Socrates' speech to be the climax of the dialogue, however to cite Diotima as the source for this speech is extremely powerful and massively ironic. Throughout all the speeches love towards women is clearly considered to be purely an act of s****l gratification, moreover, it doesn't even seem to be considered that women could partake in the virtuous love experienced by man and boy, even the flute-girl was requested to leave before the speeches began. By using Diotima as he did, Plato not only increased the power of what Socrates was saying but also deliberately rebelled against the social conventions of ancient Greece. Furthermore, her point about pregnancy and reproduction is all the more poignant against a backdrop of h********l men. In conclusion, it is unlikely that Plato wanted readers of the Symposium to take Socrates' speech (or any of the other speeches) as the true nature of Love. It is important to remember that Plato, as a Socratic student, would have wanted the reader to think for himself about the nature of Love and use the dialogue as a means to reach his own conclusion on the subject. Nevertheless, the Symposium is of huge significance in Western culture and is possibly the most definitive work on the nature of Love. ...read more.