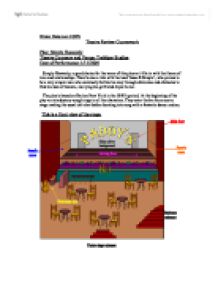 Play: Simply HeavenlyTheatre Company and Venue: Trafalgar StudiosDate of Performance: 1/11/2004 Simply Heavenly, a good choice for the name of this play as it fits in with the theme of love

Rhian Haisman 10BN Theatre Review Coursework Play: Simply Heavenly Theatre Company and Venue: Trafalgar Studios Date of Performance: 1/11/2004 Simply Heavenly, a good choice for the name of this play as it fits in with the theme of love and relationships. There's also a link with the lead 'Jesse B Simple', who proves to be a very simple man who eventually battles his way through dilemmas and obstacles to find his idea of heaven, marrying his girlfriend Joyce Laine. The play is based on Harlem New York in the 1950's period. At the beginning of the play an introductory song brings in all the characters. They enter the bar from centre stage making the usual chit-chat before bursting into song with a fantastic dance routine. ...read more.

Jesse's scene finishes then a new character is introduced, his girlfriend of five years, Joyce Laine. When the floor slides to the left Jesse leaves the stage and Joyce's bedroom slides in on the right. From what we can see in the room there is a big contrast between Jesse's room and Joyce's. Whereas both rooms are quite bare, the quality of Joyce's room is much better which shows she has class and high status. The colour scheme in her room is warm and inviting, where on the other hand Jesse's room looks cold, bare and gloomy. When Joyce arrives on stage she looks quite simple but pretty. Her hair is tied back in a smart neat ponytail and her clothes have an aura of grace about her. ...read more.

Joyce looks hurt and has an impatient tone in her voice. Her voice is quite soft and delicate and fits perfectly with her petite frame. The next scene is in the bar again and we are introduced to more new characters. There's Miss Mamie, a large lady with a large heart and Gitfiddle, the little busker who broke his guitar. Bodiddly's wife 'Arcie' comes in and causes quite a scene because she is drunk. The way she walks and speaks slurred is amusing and hilarious. The key moment which changes everything first is Zarita's first appearance. She enters the stage via the steps on the right; she does a little flirty walk by kicking her feet back and showing off. She is dressed very over the top with a matching skirt, blazer and bag. She speaks in a flirty, girly, voice and tries her best to seduce Jesse, who isn't keen on the idea at first because of his loyalty to Joyce. ...read more.