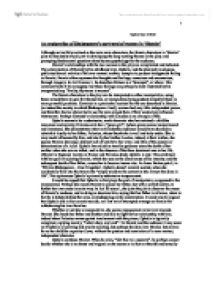 Portrayal of women in 'Hamlet'

Sophie Ryle 12JDM An exploration of Shakespeare's portrayal of women in 'Hamlet' Although not as fully realised as the main male characters, the female characters in 'Hamlet' play an absolutely crucial part in developing the deep running themes in the play, and prompting fundamental questions about human psychology for the audience. Hamlet's relationships with the two women in the play are complicated and turbulent. The cold rejection of Hamlet by his childhood love, Ophelia, and the disloyalty and gross, publicised s****l activity of his over-sensual mother, conspire to produce misogynous feeling in Hamlet. Hamlet often expresses his thoughts and feelings, conscious and unconscious, through imagery. In Act II scene ii, he describes fortune as a "strumpet", or w***e. This comment hints at his misogyny, but these feelings can perhaps be best illustrated by his exasperated cry, "Frailty, thy name is woman". The female characters in the play can be interpreted as either manipulative, using those around them to gain for themselves, or manipulated, being pushed around by those in more powerful positions. Certainly in a patriarchal society like the one described in Hamlet, (or indeed the society in which Shakespeare lived), women had very little independent power, and therefore had no choice but to use the men around them if they wanted any influence whatsoever. Perhaps Gertrude's relationship with Claudius is an example of this. Ophelia seems to be a submissive, weak character who has retained a childlike innocence and naivety; Polonius calls her a "green girl", (where green means inexperienced and immature). ...read more.

Gertrude seems to care little for the effect that her insensitivity, disloyalty and incest are having on her son, which could be explained by extreme stupidity and short-sightedness, but is more feasibly explained by utter selfishness. She freely admits a previously unseen guilt and self-disgust, (which seems to manifest itself as "black and grained spots"), under Hamlet's vehement criticism in the closet scene. This leads us to the conclusion that Gertrude is merely complying with Hamlet's wishes to remain in his favour. She is apparently malleable to the wills of the authoritative men around her, when in fact she is using her sexuality over them, whilst keeping them sweet so she can remain in a powerful position. Gertrude was used by Shakespeare to show a side of women that would have been contradictory to the expectations of an Elizabethan audience. Powerful, s******y aware, manipulative women were socially unacceptable, yet obviously in existence, and Shakespeare's portrayal of Gertrude may have served to awaken in his audiences the awareness that many women were not merely passive and quiet, and challenge the assumption that all women were weak and stupid. Central to any reading of Hamlet is the debate about sexuality and s****l mortality. Gertrude is the most overtly s****l character in the play, we are given this impression by the text in references like "Why, she would hang on him, as if increase of appetite had grown..." ...read more.

The role and portrayal of women in 'Hamlet' serves as a basis of major tragic elements in the play, and also reveals and highlights many inherent aspects of the tragic hero's character. Through the behaviour of Gertrude and Ophelia, opposites in character, one a manipulator and one a manipulated, we glean understanding of Hamlet's psychological person and his constant struggle between good and evil. This subsequently gives us a heightened grasp of the play - through analysis of the aspects of sexuality between Hamlet and the female characters, we are able to comprehend Hamlet's misogyny, why he seems depressed, irritable and neurotic, and why he cannot bring himself to exact revenge on his murderous stepfather. Through the use of women in 'Hamlet', Shakespeare observes, (hundreds of years before Freud, as noted by Bradley), how the intrinsic human wish to gratify basic desires affects all aspects of our lives. The introspection and revelation in the play prompts the audience's own introspection and revelation, as effectively now as it must have done in Elizabethan audiences. Shakespeare brings to the surface issues that we recognise and can apply to ourselves. This perhaps explains why 'Hamlet' is still the most popular play of all time and continues to engage the intellectual energies of academics. It is my belief that Shakespeare's portrayal and use of women is fundamental to the main issues that are addressed in the play. ?? ?? ?? ?? 3 1 ...read more.