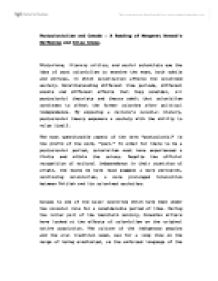 Postcolonialism and Canada : A Reading of Margaret Atwood's Surfacing and Alias Grace. Historians, literary critics, and social scientists use the idea of post colonialism to examine the ways, both subtle and obvious, in which colonization affects the colonized society. Notwithstanding different time periods, different events and different effects that they consider, all postcolonial theorists and theory admit that colonialism continues to affect the former colonies after political independence. By exposing a culture's colonial history, postcolonial theory empowers a society with the ability to value itself. The most questionable aspect of the term "postcolonial" is the prefix of the word, "post." In order for there to be a postcolonial period, colonialism must have experienced a finite end within the colony. Despite the official recognition of national independence in their countries of origin, the books we have read suggest a more pervasive, continuing colonialism, a more prolonged interaction between British and its colonized societies. Canada is one of the major countries which have been under the colonial rule for a considerable period of time. During the latter part of the twentieth century, Canadian writers have looked at the effects of colonialism on the original native population. The culture of the indigenous peoples and the oral tradition used, was for a long time on the verge of being eradicated, as the enforced language of the colonizer became the accepted norm. As many contemporary authors believe that they have been marginalized, they argue that they are similar to the tribal inhabitants, becoming "...spectators, not elements in what goes on" (Weibe: 274). As Canadians they are forced to use a language which is for the most part alien, employing words which have meaning for a metropolitan audience but have little relevance within a Canadian context. This essay is an attempt to analyze and understand the quest for their own identity and theirs efforts at adapting to their new colonized identity. ...read more.

Slowly, she becomes awakened to the unreal nature of history and memory and thus begins the re-examination of her past, 'I must be more careful of my memories, I have to be sure they're my own and not the memories of other people telling me what I felt, how I acted, what I said.'. The narrator, in her formative years, is consistently told, and therefore grows to believe, that all women should be housewives and that they should grow up to look like the pictures she cuts from the magazines. Once her awakening to the falsehoods that she has both invented and been taught she starts to witness the process of rejection and finally of, reclamation of those memories and histories that had been ousted. But before achieving this, she travels to a place beyond, or before, history that is reminiscent of a pre-colonial Canada and one of the major themes of Canadian literature, a place in the wilderness, a place of nature, a literal place her father chose so 'he could recreate, not the settled farm life of his own father but that of the earliest ones who arrived when there was nothing but forest and no ideologies but the ones they brought with them.', and a metaphorical place from where she can retrace her/history's steps and this time from a cleansed and renewed perspective. She surfaces from her past and her acceptance and acknowledgment of it is presented as vital in her process of regeneration. So, our protagonist reclaims her language and her past but she, and her fellow Canadians, are also in danger of losing all sense of a cultural identity in the face of the overpowering Americans. This cultural imperialism has recently come to be considered under the the term neo-colonialism, which was coined by Kwame Nkrumah to describe the condition of economic dependence that many post-colonial countries found themselves in. ...read more.

Each new section is prefaced by extracts from Victorian Literature of the time, from Moodie's recollections of her encounter with Grace to a poem by Christina Rossetti, and, the most ironically of all, the extract from Coventry Patmore's paean to feminine goodness and domesticity, The Angel in the House, which appears directly after Grace's disjointed account of the murders. The ironic contrast between Victorian ideals of womanhood encapsulated in the extracts and the sordid series of events recounted by Grace, a real life Victorian female, creates a purposely subversive contrast between cosy stereotype and brutal actuality. In her interviews with Jordan, Grace uses her knowledge of popular literature to shape an affecting tale for her one-man audience (LeClair: 2) Grace combines the specificity of local colour and the ideality of romance, heart rending tales of poverty with the genteel stereotype of helpless womanhood. Just as Canada the nation must come to terms with the 'trope of doubleness' - the dual history that Hutcheon characterises as the mark of the colony- Grace, the white settler, weaves into her initially believable tale (believable I must add, because the average reader is predisposed to trust Grace's beguiling tale, just like Jordan) a 'possibly fictitious inner narrative that deconstructs the outer, happier, fiction of Alias Grace'(LeClair: 2). Grace is thus using the pervasive ideology of the day to fashion a 'revolt within the power field of the dominant culture', characterized by Hutcheon as a hallmark of both postmodernism and postcoloniality (Hutcheon: 134). In her after word to the novel, Atwood writes that 'the true character of the historical Grace Marks remains an enigma'. The same can ultimately be said of her fictional counterpart, about whom we really know nothing, save for what she has told us herself. Indeed, all but the most perceptive first-time readers will end Alias Grace with the initially disconcerting sense that they have just fallen victim to a literary sleight -of- hand as smoothly executed as Grace's (all too possible) deception of Jordan. ...read more.