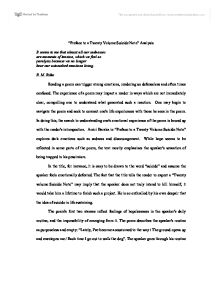 "Preface to a Twenty Volume Suicide Note" Analysis It seems to me that almost all our sadnesses are moments of tension, which we feel as paralysis because we no longer hear our astonished emotions living. R. M. Rilke Reading a poem can trigger strong emotions, rendering us defenseless and often times confused. The experience of a poem may impact a reader in ways which are not immediately clear, compelling one to understand what generated such a reaction. One may begin to navigate the poem and seek to connect one's life experiences with those he sees in the poem. In doing this, the search to understanding one's emotional experience of the poem is bound up with the reader's introspection. Amiri Baraka in "Preface to a Twenty Volume Suicide Note" explores dark emotions such as sadness and discouragement. While hope seems to be reflected in some parts of the poem, the text mostly emphasizes the speaker's sensation of being trapped in his pessimism. In the title, for instance, it is easy to be drawn to the word "suicide" and assume the speaker feels emotionally defeated. ...read more.

His appointment prevents him from realizing he may have been through more good moments than he can recount. The holes the stars leave might reflect the emptiness the speaker experiences when he does not have access to those memories. The third stanza, contrary to the first two, appears to convey a more hopeful scenario. The tone changes; the speaker shows curiosity, his attention is drawn to something external to his pain. When he says: "And then, last night I tiptoed up / To my daughter's room and heard her / Talking to someone ...", the speaker's interest is awaken by a stimulus that is outside of his pain. The poem's closing lines are: and when I opened The door, there was no one there... Only she on her knees, peeking into Her own clasped hands These last lines may be interpreted as the speaker connecting with God. The girl's posture indicates that she is praying. One could think that this action may have provoked the speaker need for recovering his faith, and therefore allowing certain peace to penetrate his despair. ...read more.

The mirrored action conveys a sense of infinity that could be connected to the speaker's renewed faith in God. Baraka's portray of the speaker as a man who struggles to overcome his despair can be seen from Rilke's point of view. Baraka's reference to the speaker's breathlessness depicts a person that does not have the strength to navigate through his painful emotions. The speaker's state may be characterized, following Rilke's quote, as a "moment of tension". His emotions are separated from himself; he is deaf to them. In the third stanza, as suppose to the first two, the speaker is more open to awaken to his anguish, or in Rilke's words, "... [his] astonished emotions living". His realization of another universe opening through his daughter's act of praying is the key to his desolation. Considering the emotions the speaker goes throughout the poem, the poetic devices used by Baraka and Rilke's reflection on sadness, one may conclude that despite his struggle, the speaker is able to relate to his daughter's little universe to canalize some of his pain. Baraka uses various techniques to effectively create a poem that allows the reader to explore its intricacies by interpreting the poem's intentions, relating them to his experience. ...read more.