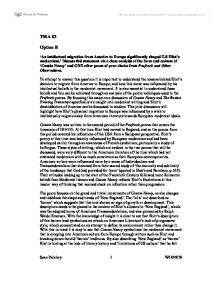 Prufrock and other observations

TMA 03 Option B 'An intellectual migration from America to Europe significantly shaped T.S Eliot's modernism.' Discuss this statement via a close analysis of the form and content of 'Cousin Nancy' and ONE other poem of your choice from Prufrock and Other Observations. To attempt to answer this question it is important to understand the reasons behind Eliot's decision to migrate from America to Europe, and how this move was influenced by his intellectual beliefs in the modernist movement. It is also essential to understand these beliefs and this can be achieved through an analysis of the poetic techniques used in the Prufrock poems. By focusing this essay on a discussion of Cousin Nancy and The Boston Evening Transcript specifically an insight into modernist writing and Eliot's dissatisfaction of America can be discussed in tandem. This joint discussion will highlight how Eliot's physical migration to Europe was influenced by a wish to intellectually migrate away from American literature towards European modernist ideals. Cousin Nancy was written in the second period of the Prufrock poems that covers the timescale of 1914/15. At this time Eliot had moved to England, and so the poems from this period covered his reflections of the USA from a European perspective. Eliot's poetry at this time was heavily influenced by European modernism and had been developed earlier through an awareness of French symbolism, particularly a study of LaForgue. These styles of writing, which are evident in the two poems that will be discussed, were very different to the American literature of the time which had not embraced modernism with as much conviction as their European contemporaries. ...read more.

The fact that they are all women also follows the 'misogyny in most of the Prufrock poems' that helps to establish the character and voice of the poet persona. The final stanza of the poem fragments and shifts again away from the observations of Cousin Nancy to an image of two busts that 'kept watch' over the previous symbolic exertions of modernism. The first bust is of 'Matthew' (Arnold) and the second 'Waldo' (Ralph Waldo Emerson). Both these figures represent canonical ancestors of Eliot and 'Waldo' also represents the implementation of Transcendentalism in New England. The description of them both upon 'glazed shelves' hints at a secondary meaning of them having a faraway, blank or distant look about them. This interpretation can be seen as another attack on America's ignorance of the inevitability of modernism and change, in place of pre-occupation and self-discovery. The two busts also represent immovable inanimate objects which highlights Eliot's modernist opinion of American culture. The final line of the poem describes them as 'The army of unalterable law' which alludes to the poem 'Lucifer in Starlight' by George Meredith. In this poem Meredith describes how Lucifer observes the army of unalterable stars that surround Heaven, making an impregnable fortress against him and therefore reminding him of his impotent and subservient status in the face of the power of God. By comparing the two busts with these stars Eliot hints that their unwillingness to be moved or changed renders them redundant as they stare blankly at the inevitable progress that Cousin Nancy represents. ...read more.

This forthright concise style was not in keeping with Romantic or Transcendentalist forms that were still dominating American attitudes and so Eliot's allusion or 'nod' to La Rochefoucauld's work can be seen as highlighting the pain that the poet persona goes through by 'turning away from a venerable European cultural milieu towards a dull American existence.' (quoted in Brown and Gupta, p.245). This image is comparable to the use of the busts in Cousin Nancy as again Eliot uses the technique of allusion to compare Meredith's impregnable stars to the attitudes of American writers. Eliot's style of writing also offers up an allusion to European and more specifically French modernist ideas with its comparisons to the work of Laforgue. This allusion takes on the symbolic ideas already discussed that highlight a disillusionment of American culture from the point of view of a modernist persona but also in the way the poetry is written. Laforgue symbolised Eliot's use of condensed syntax and free verse, and this point underlines just how far removed Eliot's intellectualism became from America. The influences of Laforgue, Bergson and European modernism in general allowed Eliot to bring together a 'synthesis of observation, aesthetic expression and philosophical understanding' to his poetry (quoted in Brown and Gupta, p.263). The subject matter of the two poems discussed and the European influenced style in which they were written identifies that Eliot's work and views on modernism were significantly shaped by his migration from America to Europe. ...read more.