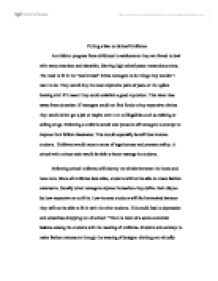 Putting a Ban on School Uniforms

Putting a Ban on School Uniforms As children progress from childhood to adolescence they are forced to deal with many emotions and obstacles. Starting high school poses tremendous stress. The need to fit in the "cool crowd" drives teenagers to do things they wouldn't want to do. They would buy the most expensive pairs of jeans or the ugliest looking shirt if it meant they could establish a good reputation. This takes time away from education. If teenagers could not find funds to buy expensive clothes they would either get a job or maybe even turn to illegalities such as robbing or selling drugs. Enforcing a uniform would take pressure off teenagers to attempt to impress their fellow classmates. This would especially benefit low-income students. Uniforms would cause a sense of togetherness and promote safety. A school with a dress code would be able to better manage its students. Enforcing school uniforms will destroy the divider between the haves and have-nots. Since all uniforms look alike, students will not be able to create fashion statements. ...read more.

After the Columbine incident public schools are doing as much as they can to eradicate reasons for students to cause violence. If there was an enforced dress code in the public schools then "gang type clothing would be eliminated, and crimes such as theft of expensive clothing or footwear would be substantially reduced (McDaniel, 1996.) If students are not permitted to wear gang related clothing they will be less tempted to join a gang and start causing violence. For example, if students are not allowed to wear trench coats or long jackets it would be very difficult to hide weapons. Blue jeans and bandanas are often banned from school because they tempt students to join a gang. Wearing such clothes shines a positive light on gangs and gang related activity, tempting students mix in with the wrong people. Wearing uniforms prevents outside violence as well. Because students will be dressed in a similar fashion, outsiders can be easily spotted. Instituting a dress code will improve respect that students have for their teachers as well as for each other. ...read more.

During every pep rally and basket ball game our school would always support the team in matching colors. We would out support our opponents because the school spirit was so high. My high school never had problems with violence. One of the biggest concerns in my high school was attempted threats and hints of violence. The administration did every thing in their power to eliminate them. My high school prided itself in being very diverse. However, the students were not divided among each other. There were no real "cliques" and for the most part people got along. There are many factors to the way my high school was ran but I think most of the problems that did not exist were due to enforcement of a dress code. Enforcing a mandatory dress code will benefit the public school education system in many ways. Not only will it eradicate dividers among students but it will also promote a non-violent atmosphere and a sense of togetherness. Uniforms force students to show respect towards the teachers. They get a sense of the business atmosphere instead of a casual one making them take schoolwork more seriously. Overall, enforcement of uniforms is beneficial to schools. ...read more.