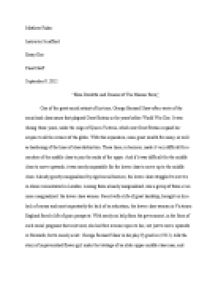 Pygmalion. It is the desire to obtain an education, or at least the appearance of one that takes Eliza to Dr. Henry Higgins house

﻿Matthew Fisher Instructor Scrafford Essay One Final Draft September 9, 2012 ?Eliza Doolittle and Dreams of The Manner Born? One of the great social satirist of his time, George Bernard Shaw often wrote of the social and class issues that plagued Great Britain in the years before World War One. It was during those years, under the reign of Queen Victoria, which saw Great Britain expand her empire to all the corners of the globe. With this expansion, came great wealth for many, as well as hardening of the lines of class distinction. These lines, or barriers, made it very difficult for a member of the middle class to join the ranks of the upper. And if it was difficult for the middle class to move upwards, it was nearly impossible for the lower class to move up to the middle class. Already greatly marginalized by rigid social barriers, the lower class struggled to survive in slums concentrated in London. ...read more.

drunkard as a father, she found herself put out onto the streets by her father who ?never brought her up at all? (Shaw 2) as soon as she was ?old enough to earn her own living? (Shaw 2). It is the desire to obtain an education, or at least the appearance of one that takes Eliza to Dr. Henry Higgins house. Just as much then as it is now, an education is the first step to success in life. While Eliza, who grew up in the Lisson Grove slums of London, may not have had an education, she has the smarts enough to know that she will need one in order to survive. Moreover, while the education offered to most women in Victorian England taught little more than the knowledge of how to ?maintain order inside the home and provide a safe haven? (Langlinans 76) for their families, it imparted upon women several years of elocution studies. ...read more.

?I sold flowers. I did not sell myself? (Shaw 4) declares Eliza to Higgins as her tutelage comes to an end and she realizes that she is no better off than she was when she had started. In one of Shaw?s other major plays, Mrs. Warren?s Profession, he equates prostitution with capitalism and it?s damning effect on society. Here Shaw makes the connection between prostitution, the lack of an education , and the life of a poor flower girl. While Eliza may or not end up with the respectability she craves so desperately and the education she so desires, she Fisher Four leaves the audience with the knowledge that she will ??always have her character, something that can?t be taken away? (Shaw 2). For it is the strength of Eliza?s character, hardened and created by years of abuse as a lower class woman, which allows her to survive her ordeal with Higgins with her dignity intact. ...read more.