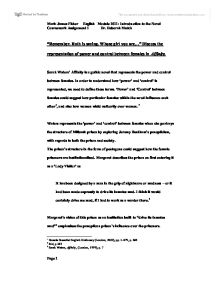 Remember whose girl you are...Discuss the representation of power and control between females in Affinity

"Remember. Ruth is saying. Whose girl you are..." Discuss the representation of power and control between females in Affinity. Sarah Waters' Affinity is a gothic novel that represents the power and control between females. In order to understand how 'power' and 'control' is represented, we need to define these terms. 'Power' and 'Control' between females could suggest how particular females within the novel influence each other1, and also how women wield authority over women. 2 Waters represents the 'power' and 'control' between females when she portrays the structure of Milbank prison by exploring Jeremy Bentham's panopticism, with regards to both the prison and society. The prison's structure in the form of pentagons could suggest how the female prisoners are institutionalised. Margaret describes the prison on first entering it as a 'Lady Visitor' as It has been designed by a man in the grip of nightmare or madness - or it had been made expressly to drive its inmates mad. I think it would certainly drive me mad, if I had to work as a warder there.3 Margaret's vision of this prison as an institution built to "drive its inmates mad"4 emphasises the panopticon prison's influence over the prisoners. The prison's surveillance also illustrates the power and control between women, as the matrons monitor the prisoners through the door flaps and this creates a sense of unease and lack of privacy amongst the prisoners. ...read more.

We see that Margaret reveals herself to Selina as "Aurora"10. This is ambiguous because we see although Margaret uses this identity as a vehicle to perhaps transcend her mother's view and society's view, Margaret has only adopted the identity of 'Aurora'11 because her ex-lover Helen had identified her as this. This to some extent also represents the authority that women have over other women. Power and Control between females could also be represented by the structure of the novel because we see that in Affinity, there is intertextuality portrayed by Margaret's diary entries based on her visits to Milbank prison. Her mother takes a dislike to this as we see that mid-way through the novel; Mrs Prior suggests "'You are not Mrs Browning, Margaret - as much as you would like to be' "12 and this is significant because it appears that Margaret's own emotions, thoughts and feelings are oppressed. However, this observation of Margaret's diary entries can be seen in context because we understand that when Water's 'lesbian' novel 'Tipping the Velvet' was first produced in 1998, due to the control and censorship of written work in the 1990's, it could not be categorised as such under a particular genre13. The critic Mark Llewellyn has argued that: There is an inescapable desire to categorise the novel Waters' wants to write. ...read more.

Water's theme of spiritualism particularly illustrates this because mid-way through the novel, although Selina indicates that "they call me Dawes, here like a servant"17, both Margaret and Selina create identities; Margaret refers to "Dawes"18 as "Selina"19 and Margaret reveals herself as "Aurora"20. This is ambiguous because not only does this transcend the coding system that the prison adopts, on the other hand, the identities allow Selina and Margaret to envisage their own humanness. Furthermore, this overturning of power and control between females in Waters' novel is explored by the end through Margaret's deprivation of wealth and power as Selina and Ruth travel together and steal Margaret's money, tickets and passports, as she suggests "I have been robbed, I thought, by my own servant!"21 The critic Sheryl Stevenson has argued that "Waters similarly banks on her readers' tendency to disregard Margaret's servant, re-enforcing the betrayal of sisterhood when class difference easily trumps gender solidarity."22 This is agreeable because Selina and Ruth's escape illustrate how women in the novel can escape the influence and dominance of other women, as Selina is able to escape the prison, and Ruth is able to escape from Margaret's control. In Affinity, Power and control between women is represented by the panopticism of Margaret's position in Victorian Society and Selina's position in the prison. However, Waters' themes of spiritualism and lesbianism act as vehicles where women can transgress the dominance and influence of other women in society. ...read more.