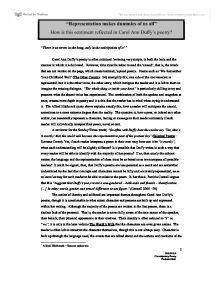 &quot;Representation makes dummies of us all&quot; - How is this sentiment reflected in Carol Ann Duffy's poetry?

"Representation makes dummies of us all" How is this sentiment reflected in Carol Ann Duffy's poetry? "There is no terror in the bang, only in the anticipation of it" 1 Carol Ann Duffy's poetry is often criticised for being very simple, in both the lexis and the manner in which it is delivered. However, time must be taken to read the 'unsaid', that is, the words that are not written on the page, which create textured, layered poems. Poems such as 'We Remember Your Childhood Well' (The Other Country : 24) exemplify this; one side of the conversation is represented, but it is the other voice, the other story, which intrigues the reader and it is left to them to imagine the missing dialogue. "The whole thing is inside your head" is particularly chilling to try and presume what the absent voice has experienced. The combination of both the spoken and unspoken at once, creates more depth to poetry and it is this that the reader has in mind when trying to understand it. The Alfred Hitchcock quote above explains exactly this, how a reader will anticipate the unsaid, sometimes to a more extreme degree than the reality. The question is, how a poet, or indeed any other author, can reasonably represent a character, feeling or message to their reader accurately if each reader will individually interpret their poem, novel or text. A reviewer for the Sunday Times wrote; "So often with Duffy does the reader say 'Yes, that's it exactly' that she could well become the representative poet of the present day" (Selected Poems : Reverse Cover). ...read more.

'Recognition' from Selling Manhattan is another example of the use of word association ad distorted structure to construct images. Cheese. Kleenex. It did happen. I lay in my slip on wet grass, laughing. Years. I had to rush out blind in a hot flush [...] (Selected Poems : 41) The speaker falls into broken sentences and selects just key words to describe the events. The reader is then forced to do the reverse; take the words and create the situation around them, like having a blank canvas with a few outlines upon it, and recreating a painting. Of course this is not always achievable and if put into practise, every painting would be different. Thus, the reader may not recreate the same scene that Duffy was imagining when writing. It seems that in trying to represent character and identity, Duffy achieves only in restricting the view the reader has. As in 'Education for Leisure' Carol Ann Duffy often confuses the reader by representing two, or sometimes more, personas within the same character. The best example of this is in 'Psychopath' from Selling Manhattan (Selected Poems : 43-6). The first persona is enforced from the start, in the title. We are told that the speaker is a "Psychopath", the judgement is already made for us, though whether this is an accurate reflection of the character is questionable. There is an odd juxtaposition between this preconceived perception and the beautifully lyrical manner in which the character descries his actions and thoughts. The opposites are continued throughout the poem; from the fairground bright lights and happiness, to the talk of r**e and s****l acts, the innocent girl and the knowing speaker. ...read more.