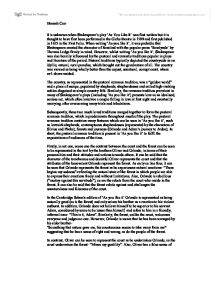 Review and history of Shakespeare's play 'As You Like It'.

It is unknown when Shakespeare's play 'As You Like It' was first written but it is thought to have first been performed in the Globe theatre in 1599 and first published in 1623 in the First Folio. When writing 'As you like it', it was probable that Shakespeare created the character of Rosalind with the popular prose 'Rosalynde' by Thomas Lodge firmly in mind. However, whilst writing 'As you like it', Shakespeare was also heavily influenced by the pastoral and romantic traditions popular in plays and literature of the period. Pastoral traditions typically depicted the countryside as an idyllic, natural, rural paradise, which brought out the good nature of all. The country was viewed as being wholly better than the unjust, unnatural, corrupt court, where evil-doers resided. The country, as represented in the pastoral romance tradition, was a "golden world" and a place of escape, populated by shepherds, shepherdesses and exiled high-ranking nobles disguised as simple country folk. Similarly, the romance tradition prevalent in many of Shakespeare's plays (including 'As you like it') presents love as an idealised, sexless act, which often involves a couple falling in love at first sight and eventually marrying, after overcoming many trials and tribulations. Subsequently, these two much loved traditions merged together to form the pastoral romance tradition, which is predominate throughout much of the play. The pastoral romance tradition contains many features which can be seen in 'As you like it', such as lovesick shepherds, contemptuous shepherdesses (represented by the characters of Silvius and Phebe), forests and journeys (Orlando and Adam's journey to Arden). In short, the pastoral romance tradition is present in 'As you like it' to fulfil the expectations of audiences of the time. Firstly, in act one, scene one the contrast between the court and the forest can be seen to be represented in the text by the brothers Oliver and Orlando, in terms of their personalities and their attitudes and actions towards others. ...read more.

It must also be noted that film as a genre allows the director and camera to choose whom the audience views, by means of zooming in or focusing on a particular person. This gives a huge scope for further highlighting the parallels between Oliver and the court, an example of which occurs during Oliver's soliloquy, during which the camera focuses solely on Oliver. Oliver's subsequent reluctance to gaze directly at the camera during this hints at his shifty and unnatural nature, as the court is also unnatural and untrustworthy. In complete contrast, Orlando can be seen to represent the natural forest in his simple unadorned clothing, which reflects the simplicity and natural state of the forest, which has been little altered by humans. Orlando's somewhat effeminate appearance also reflects the kind and caring attributes of the forest, which are often associated with female characteristics. Also, Orlando places his hand on Oliver's throat, which is true to the text and shows that Orlando represents the forest (assuming that he only takes this action to restrain Oliver during a violent outburst). This action can also be seen as Orlando displaying his natural and understandably angry emotions. It is my belief that Orlando and Oliver also represent the contrast between the court and the forest in the 1997 edition of 'As you like it', which was directed by Christine Edzard. Firstly, Orlando has a wild unkempt appearance, thus reflecting the fact that he was brought up "rustically"and reflecting the rustic state of the forest as described in the text. However, Edzard portrays the forest as a barren, desolate urban wasteland, which could be seen to reflect Orlando's emotions and inner turmoil but in no way follows the conventions of the pastoral tradition, apparent throughout much of the text. Moreover, Orlando adopts a casual, relaxed stance when he leans languidly on a pillar, personifying the natural, relaxed state of the forest. ...read more.

as he banishes Rosalind from court due to the fact that he believes his daughter Celia to be in direct competition with her. Fredericks expulsion of Rosalind from court also shows that he is "Humorous", as is the court. Even so, the forest does exert a beneficial influence on Frederick and converts him, showing how evil can be converted to good- "Converted both from his enterprises and from the world". Similarly, the contrast between the court and the forest can also be represented by Olivers conversion from bad to good, from experiencing unnatural feelings to natural feelings upon his entry to Arden- "My conversion so sweetly tastes, being the thing I am". Arden is also presented as a magical, good, mythical place in the RSC production, in which actors play trees and sheep, thus conforming to the pastoral tradition and consequently making the forest appear to be a good place. Similarly, Orlando represents the forest as it is governed by natural elements, particularly in Christine Edzards version of the text where Arden appears to be cold and windy (and smoke is billowing from a fire) and Orlando is also governed by his natural emotions and feelings. However, the court and the country are barely distinguishable in this as both are set in urban areas, thus making this a challenging interpretation at best. Also, in contrast to Amiens song about false friendship and ingratitude- "Thou art not so unkind as mans ingratitude"- Orlando only ever displays gratitude towards the Duke and true friendship towards the elderly Adam. This inherent good nature and display of genuine affection is comparable to the good nature of the forest. Finally, the conversation between Touchstone and Corin regarding court life versus country life in act three, scene three describes how the court dwellers mock the country dwellers, as Oliver mocks Orlando- "Behaviour of the country is mockable at court". In short, the contrast between the court and the forest can be represented by the two pairs of brothers in both act one, scene one and the play as a whole. Hannah Carr ...read more.