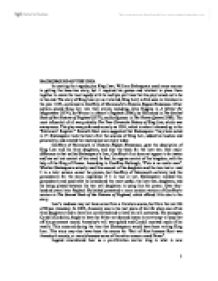 Review and interpretation of King Lear

BACKGROUND OF THE IDEA In creating the tragedy play King Lear, William Shakespeare used many sources in getting the base-line story, but it required his genius and intellect to place them together to create the true tragedy with its multiple plot lines that his play turned out to be in the end. The story of King Lear (or as it started, King Leir) is first seen in literature in the year 1135, contained in Geoffrey of Monmouth's Historia Regum Britanniae. Other authors placed King Leir into their stories including; John Higgins in A Mirror for Magistrates (1574), by Warner in Albion's England (1586), by Holinshed in The Second Book of the Historie of England (1577), and by Spencer in The Faerie Queen (1590). The most influential of all was probably The True Chronicle History of King Leir, which was anonymous. This play was performed as early as 1594, which is when it showed up in the "Stationers' Register." Kenneth Muir even suggested that Shakespeare "may have acted in it". Shakespeare took the best of all the sources of King Leir, added his touches and personality, and created the masterpiece we enjoy today. Geoffrey of Monmouth in Historia Regum Britanniae, gave the description of King Lear and his three daughters, and also the basis for the love test. One major difference is that unlike Shakespeare's Lear, Geoffrey's Leir does not appear to be insane and has not lost control of his mind. In fact, he regains control of the kingdom, with the help of the King of France. According to Geoffrey Bullough, "This is no senile man". Whether Shakespeare actually read this account of the daughters and the love test or read it in a later version cannot be proven, but Geoffrey of Monmouth certainly laid the groundwork for the story, regardless if it is true or not. Shakespeare molded this groundwork and used what he considered the most useful; the love test, daughters, and his being played between his two evil daughters in using him for power. ...read more.

The strength of this solitary ego manifests itself in the extraordinarily powerful and brutal images with which Lear expresses his anger at Cordelia's refusal to play along with his game: The barbarous Scythian, Or he that makes his generation messes To gorge his appetite, shall to my bosom Be as well neighbored, pitied, and relieved, As thou my sometime daughter. The language here and the emotions it expresses are so incommensurate to the surface events which have prompted it, so in excess of the cause, that there can be only one explanation: Lear is so passionately wrapped up in a particular conception of himself that he simply explodes emotionally when any form of a challenge (however politely framed) from any quarter manifests itself. The anger here launches the story, which, from this point on, focuses (among other things) on the stripping away of all those things that Lear has always relied upon to reinforce his sense of his own importance, of his identity, until he is left alone, naked, and mad running through nature away from all society. Because Lear cannot tolerate Cordelia's apparent failure to live up to what he requires from her for his own self-gratification, he unleashes a chain of events which ultimately removes everything from him which reassures him who he is. It's in the context of this step-by-step loss of his earlier identity (or the external manifestations of it) that the question of Lear's hundred knights becomes a central issue. The hundred knights are not, in themselves, at all necessary to Lear's daily routine and comforts (as the sisters point out, quite correctly). But they are essential to his sense of his identity as the leader, the person to whom others defer and give allegiance. They are there to give back to him the image of himself he wants to maintain. Regan and Goneril are quite correct to resent Lear's huge retinue and to sense that their father is gripped by a self-image which has no accurate perception of the new reality. ...read more.

Why should a dog, a horse, a rat, have life, And thou no breath at all? Thou'lt come no more, Never, never, never, never, never! Pray you, undo this button. Thank you, sir. Do you see this? Look on her, look her lips, Look there, look there! And he dies in a mad fit, tearing off his clothes (the same gesture which signaled the onset of his insanity in the storm), still trying to convince himself that Cordelia cannot be dead. He thought he had come to some new awareness, but that insight is removed. The mystery of life is not so benevolent as Lear thought it might be (and as we may have been seduced into thinking by the beauty of Lear's declaration of love). Hence, the hope of a significant transforming insight is cancelled, and we are left in ambiguous doubt. The remaining characters say very little, and there is no clear assumption of authority by anyone. Kent's comment salutes Lear's death as something to be welcomed: Vex not his ghost. O, let him pass! He hates him much That would upon the rack of this tough world Stretch him out longer. That image of Lear's life as a torture session does not encourage us to build much hope upon Lear's earlier declaration of love for Cordelia (of the sort which might be fostered if Kent had said something like "Well, at least he found love again before he died"). If the survivors see nothing of value in what has taken place, we are not given any encouragement to find something on which to build any final reassuring insight. L I T E R A T U R E : 1. William Shakespeare, King Lear 2. The New Cambridge Shakespeare 3. The Cambridge Companion to Shakespearean Studies 4. A.C.Bradley, Shakesperean Tragedy 5. Anthony Burgess, Shakespeare 6. Geoffrey Bullough, King Lear 7. Joseph Satin, King Lear 8. Kenneth Muir, Great Tragedies I: King Lear 9. www.shakespeare-online.com 10. www.shakespeare.com 11. www.shakespeare-about.com 1 ...read more.