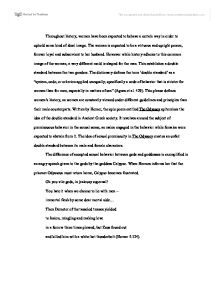 Review of The Odyssey by Homer.

Throughout history, women have been expected to behave a certain way in order to uphold some kind of ideal image. The woman is expected to be a virtuous and upright person, forever loyal and subservient to her husband. However while history adheres to this common image of the woman, a very different mold is shaped for the man. This establishes a double standard between the two genders. The dictionary defines the term 'double standard' as a "system, code, or criterion applied unequally; specifically a code of behavior that is stricter for women than for men, especially in matters of sex" (Agnes et al. 429). This phrase defines women's history, as women are constantly viewed under different guidelines and principles than their male counterparts. Written by Homer, the epic poem entitled The Odyssey epitomizes the idea of the double standard in Ancient Greek society. It revolves around the subject of promiscuous behavior in the sexual sense, as males engaged in the behavior while females were expected to abstain from it. The idea of sexual promiscuity in The Odyssey creates an unfair double standard between its male and female characters. ...read more.

engage in such activity, and that this was at the fault of their male counterparts, who were allowed to participate in such sexual looseness. In this speech she outwardly scrutinizes the norms of society, deeming them as hypocritical. This difference in standard concerning sexual promiscuity is present in the highest class of Greek culture, the gods, which is proof enough of its prevalence. The Odyssey highlights this idea further by projecting the ideas onto not just immortal beings, but mortal beings as well. Odysseus is a prime example. Although he claims loyalty to his wife Penelope, Odysseus does not hesitate to submit to the Greek goddess' desire for him. Calypso did nothing to conceal her longing for Odysseus when she held him captive on her island. Stranded, Odysseus spent many years with the Greek goddess and "he lay with her each night, for she compelled him" (Homer 5.163). Despite the fact that Calypso required him to sleep with her on a regular basis, nothing in the text indicates that Odysseus literally did just that. ...read more.

This situation shows the different expectations of men and women regarding their sexual behavior. In both incidences, Odysseus seems hypocritical due to the fact that his actions do not coincide with his claim to remain loyal to his wife. Through him, The Odyssey projects the idea of promiscuity as an acceptable act for only the male characters of the epic tale. In The Odyssey, women were discouraged by society to become sexual promiscuous while men were allowed to indulge their sexual impulses. Homer's projection of this theme to both immortal and mortal beings makes it apparent that it was a societal norm. As with many aspects of Greek culture, this too has also been adapted into modern day society. President Bill Clinton did not receive nearly as much criticism for his affair with Monica Lewinsky as Britney Spears did for her activities following her breakup with Justin Timberlake. Disapproval fell upon Spears despite the fact that there was no substantial proof of sexual promiscuity on her part, and while Clinton's was quite apparent, he did not receive the same amount of backlash. The double standard regarding sexual promiscuity is a subject that has lasted from Ancient Greece, documented in The Odyssey, up until the present date, documented in today's popular culture. ...read more.