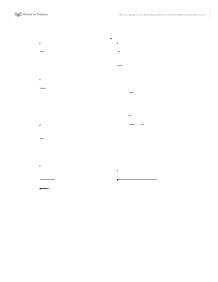 Scene Analysis of Vinegar Tom Scene One We meet Alice and the Man (who only appears in this scene). However the audience wouldn't know or recognises her as Alice until she appears in Scene 3. Scene Two We meet Jack and Margery for the first time. There is one sign that things in this town aren't going that well. We can tell this because of the line: "Died last week. There's two or three cows died in the neighbourhood. " Scene Three In this scene we meet Joan Noakes who Margery and Jack spoke about in the previous scene. Joan Noakes is a poor widow and is Alice's Mother Scene Four In this scene Margery is attempting to make butter. Because the butter won't form she starts to sing a song. I presume she starts to sing cos she is quite superstitious. Joan arrives to asks Margery for yeast to make some loaves of bread and then if there some yeast left some beer, now because of this Margery replies no because as far as she's concerned Joan would just use it all to make beer and then she'd get drunk. Then because Margery won't help her, Joan damns the butter that Margery is making to hell. ...read more.

The thought of burning a calf was made a reality but it was too late to save the other calves. Ellen hands them a cloudy glass for them to look into to look for a good witch what shocks them is that they see Mother Noakes. They take it that this was a sign to prove that she is a witch. Scene Eleven Jack goes back to ask Ellen why he saw what he saw and then asks Ellen what he should do about his feelings for Alice. Scene Twelve Joan walks past Margery's house to supposedly see what was the awful stench that hung in the air. Margery then says that a good stench brings a witch to be inquisitive to where it is coming from. Margery starts a fight with Joan by scratching at her head to draw blood. Scene Thirteen Susan and Alice are stood outside of Jack and Margery's discussing that Alice had seen the Man again riding a horse with a beautiful young lady whom Alice threats to scratch the eyes out of the girl's head. Susan asks inquisitively "was he in black still?" Alice then says "that this time he was wearing a blue velvet jacket. Susan repeats this and Alice yells at her and Susan starts to cry almost uncontrollably. ...read more.

Scene Sixteen In this scene Betty talks to Ellen about she is worried that she will be hung for witchcraft. Ellen suggests to Betty that her safest option is to get married. Scene Seventeen In this scene Alice is tied up seated on the floor. Goody is guarding her. When Alice starts to drop off Goody bangs a drum to wake her up. Packer enters and tells Goody to go and get some sleep. So Goody leaves. Alice pleads with him to let her have her boy. Packer gets the drum and starts banging it. Alice starts to complain that it is starting to make her head throb. Scene Eighteen At the beginning of this scene Goody is looking in every nook and cranny of Susan body. Joan has quite a long monologue in this scene and when Packer asks "Is there any reason you shouldn't be hanged?" Joan replies "I'm with child" Scene Nineteen This is a prayer by Margery for Joan and Ellen as they are being hung. Scene Twenty In this scene, Susan asked, "how can you look?" Alice just turns and says, "She wasn't a witch. She wouldn't know how." At the end of this scene Alice goes on about how she'd like to be a witch so she could kill all the people who have lead to her Mother's death. Scene Twenty-one This scene is sort of round up scene to round up why witches were evil ...read more.