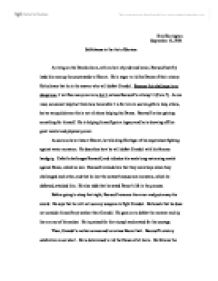 Selfishness in the Act of Service.

Erin Harrington September 11, 2001 Selfishness in the Act of Service Arriving on the Danish shore, with an heir of pride and honor, Beowulf swiftly leads his men up the countryside to Heorot. He is eager to rid the Danes of their misery. He believes that he is the answer who will defeat Grendel. Because this challenge is so dangerous, it terrifies many warriors, but it entices Beowulf to attempt it (Core 7). As we read, we cannot help but think how honorable it is for him to use his gifts to help others, but as we quickly see this is not all about helping the Danes. Beowulf is also gaining something for himself. He is helping himself gain a legacy and he is showing off his great mental and physical power. ...read more.

He also adds that he saved Breca's life in the process. Before going to sleep that night, Beowulf removes his armor and puts away his sword. He says that he will not use any weapons to fight Grendel. He boasts that he does not consider himself any weaker than Grendel. He goes on to defeat the monster and rip his arm out of his socket. He is praised for his triumph and envied for his courage. Then, Grendel's mother comes and terrorizes Heorot hall. Beowulf's victory celebration is cut short. He is determined to rid the Danes of all harm. He follows the blood of Grendel to the swamp where the monsters live. ...read more.

Beowulf, who believes that he can defeat the fire dragon on his own, is eventually killed by beast, but not without ending it's life first (Core 6). He orders Wiglaf to build a high tomb at the sea's edge and call it Beowulf's Burrow to remind everyone of his fearless courage. He wants fishermen to look at it for inspiration when they are on the sea. Beowulf helped many people, but not without letting everyone know of his many strengths and his amazing skill. After all of the battles he has fought and after all the people he has helped, Beowulf died knowing his own strength and wanting other people to remember it. He wanted to gain epic immortality. This he did, and we still read about him today. Beowulf will continue to be a hero, amazing to some and selfish to others (Core 10). ...read more.