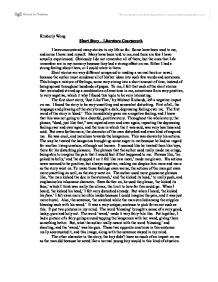 Short story - I have encountered many stories in my life so far.

Kimberly Wong Short Story - Literature Coursework I have encountered many stories in my life so far. Some have been read to me, and some I have read myself. Many have been told to me, and there are few I have actually experienced. Obviously I do not remember all of them, but the ones that I do remember are in my memory because they had a strong effect on me. Either I had a strong feeling about them, or I could relate to them. Short stories are very different compared to reading a normal book or novel, because the author must condense all of his/her ideas into such few words and sentences. This brings a mixture of feelings, some very strong into a short amount of time, instead of being spread throughout hundreds of pages. To me, I felt that each of the short stories that we studied stirred up a combination of emotions in me, sometimes from very positive, to very negative, which it why I found this topic to be very interesting. The first short story, 'Just Like That,' by Michael Richards, left a negative impact on me. I found the story to be very unsettling and somewhat disturbing. ...read more.

Also, the sentence, 'he watched while the man strolled among the cripples blessing each with his wand.' It was a very unique, sentence to pick for an act such as this. It put two pictures in my mind. The word 'blessing' brought a sense of a very good, lucky, pure and holy act. The word 'wand,' made it very fairy-tale like. Put together, I had a picture of a fairy going around tapping the kangaroos with her wand, giving them something better. But, what the author really meant with the word 'blessing,' and shooting, and the 'wand,' was his gun. These two opposite emotions in this sentence really accentuated it, and this image, along with the sentence stayed in my mind. The other character in the story, the boy didn't have as much of an impact on me as the man did because he acted like a normal young boy would in this kind of situation. I felt as though he was in the story to make the character of the man seem even worse. For example, if the man was hunting with another man, his friend, and they both did those actions, I would still feel disgusted and shocked by their actions, but instead, the author chose a boy. ...read more.

Julie and I sat in our sears and watched.' When I heard this, I felt like it described how teenagers act very well. Some are the leaders, who don't care what people think and do whatever they want, while other are in that group, but just watch and not do any crazy things. The paragraphs about uniforms, school life and social life, were my favourite parts, and brought a smile to my face because some of it was actually true! The parts about changing yourself to want to fit in, even if it was totally ridiculous, and the phrase, 'as you kept reminding your mother.' I felt that this described how teenagers always thought that their parents were so 'old' and 'out of style.' But the thing I found especially true (more in my old school, than now), was the sentence, 'At school the idea was to get good marks, but not too good, and without appearing to do any work.' That entire paragraph was also relevant to me, and made me enjoy the story even more. These two stories, although I felt totally different emotions for each, had the most effect on me. This was because I had a very strong feeling about one, and could relate to the other very well. One, I found very enjoyable and amusing, while the other one, I found disturbing and unsetlling. ...read more.