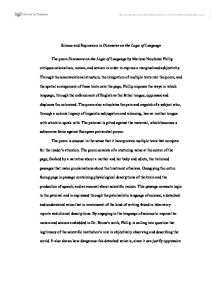 Silence and Opression in Discourse on the Logic of Language

Silence and Expression in Discourse on the Logic of Language The poem Discourse on the Logic of Language by Marlene Nourbese Phillip critiques colonialism, r****m, and sexism in order to express a marginalized subjectivity. Through the unconventional structure, the integration of multiple texts into the poem, and the spatial arrangement of these texts onto the page, Phillip exposes the ways in which language, through the enforcement of English as the father tongue, oppresses and displaces the colonized. The poem also articulates the pain and anguish of a subject who, through a colonial legacy of linguistic subjugation and silencing, has no mother tongue with which to speak with. The paternal is pitted against the maternal, which becomes a subversive force against European patriarchal power. The poem is unusual in the sense that it incorporates multiple texts that compete for the reader's attention. The poem consists of a stuttering verse at the center of the page, flanked by a narrative about a mother and her baby and edicts, the italicized passages that make proclamations about the treatment of salves. Occupying the entire facing page is passage containing physiological descriptions of the brain and the production of speech, and an account about scientific r****m. This passage connects logic to the paternal and is expressed through the paternalistic language of science, a detached and understated voice that is reminiscent of the kind of writing found in laboratory reports and clinical descriptions. By engaging in the language of science to expose the r****m and sexism embedded in Dr. ...read more.

The speaker has no mother tongue and is forced to express herself with a foreign father tongue, which leaves her "tongue/dumb/dumb-tongued/dub-tongued" (lines 31-34) and, to an extent, silenced. Expressing herself in English is painful for the speaker because of its foreignness and because of the violence with which it was forced into her culture. Her efforts to speak causes her pain, anguish, and frustration because she has great difficulty in expressing herself and telling her story in her own terms using the father tongue. English is not her own language, but one violently imposed upon her culture by their colonial masters. Language is not a neutral medium, but one that reproduces the norms, values, and ideologies of a culture. In the case of English, it reproduces the r****t and s****t assumptions of a Western patriarchal hegemony. It is through language that one learns about and expresses one's own identity. Because of colonialism, the speaker has no mother tongue and only knows English, the same language spoken by the colonial masters who cut out the tongues of the slaves, and the same language that marginalizes the speaker as a woman of colour and relegates her to the role of the inferior Other. Thus, the speaker has great difficulty representing her own subjectivity since English is "a foreign anguish" (line 9), an oppressive and disempowering language. The speaker's search for her mother tongue and words with which to express herself with also represents her culture's search for their own cultural identity and history, which has become distorted and fragmented by colonial rule. ...read more.

The central voice of the poem acknowledges the difficulty of doing so: the father tongue leaves her "dumb-tongued" (line 32); the r****t and s****t ideology embedded in the language suppresses her subjectivity. The poem sheds light on how Western language and ideology isn't as innocent and value-neutral as it appears. By talking about colonialism, the silencing of slaves, the eradication of the mother tongue, and scientific r****m and sexism, the poem makes the reader conscious of the ways in which Western discourse, ideology, and knowledge making is biased against women and people of colour. As well, the poem has the reader empathize with the agony of silence and oppression of the marginalized. However, the poem is not merely about oppression and silencing. Through the mother-daughter story printed on the left margin of the page, Phillip explores new ways of using the language in ways that do not perpetuate the norms and ideology of Western patriarchy. The mother-story's unusual positioning relative to the other texts represents going against convention in order to create a new literary tradition to empower articulate the subjectivities of women of colour. Discourse on the Logic of Language expresses a subjectivity that has been repressed by Western ideology and language by examining its power relations and violent history, and exploring new ways of writing. The poem, through its critique of the father tongue, colonialism, and science, uses English to talk back to the colonial masters - it dismantles the master's house with the master's tools and envisions new ways of expression. ...read more.