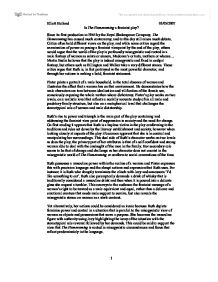 Since its first production in 1965 by the Royal Shakespeare Company, The Homecoming has caused much controversy, and to this day still raises much debate.

Since its first production in 1965 by the Royal Shakespeare Company, The Homecoming has caused much controversy, and to this day still raises much debate. Critics often hold different views on the play, and while some critics regard the examination of power as posing a feminist viewpoint by the end of the play, others would argue that the world of the play is profoundly misogynistic and rooted in a male fantasy of women as saints or sinners, Madonna's or tarts, mothers or whores... Martin Esslin believes that the play is indeed misogynistic and fixed in oedipal fantasy, but others such as Billington and Walker take a very different stance. These critics argue that Ruth is, in fact portrayed as the most powerful character, and through her actions is making a bold, feminist statement. Pinter paints a portrait of a male household, in the total absence of women and illustrates the effect that a woman has on that environment. He demonstrates how the male characters are torn between idealisation and vilification of the female s*x, consciously exposing the whole mother-w***e dichotomy. Pinter's play works on two levels, on a realistic level that reflects a socially accurate study of an all male and predatory family structure, but also on a metaphorical level that challenges the stereotypical role of women and male dictatorship. ...read more.

Critics debate whether the play is truly feminist on the basic principle that Ruth follows the men's wishes and ventures into prostitution. Feminists would consider this a choice made by Ruth as it catered to her needs and gave her economic stability, but misogynists would view this differently and as a sign of male dominance and not female manipulation. The misogynistic and totalitarian themes are strong in the first Act portraying Lenny as the dominant figure who displays his derogatory view of women. When Ruth enters the play he attempts to impress her, but also stamp's his authority on the situation. Lenny: ...So I gave her another belt in the nose and a couple of turns of the boot and sort of left it at that. Ruth: How did you know she was diseased? Lenny: How did I know? Lenny: I decided she was. The reference to violence illustrates the treatment of women and their status, which reinforces the view that The Homecoming is misogynistic expressing the suppression in society. I believe Ruth's comment 'How did you know she was diseased?' changes the focus of the dialogue from misogynist vulgarity to feminine prominence, Ruth does not appear shocked or uncomfortable by the events that Lenny has told of. ...read more.

His adoption of many of the traditional conventions within society, such as the domestic setting of the sitting room in The Homecoming and seemingly realistic dialogue between recognisable characters, which transform the apparently familiar into something unexpected shocked many audiences in the 1960's. Due to the recognisable and familiar structure of the family in the play and the unexpected and absurd happenings of a woman entering the structure and being put on the game was thought to be outrageous. The developing range of social concepts and attitudes combining to finish in the success of a woman attaining a sense of freedom, authority and equality stunned audiences. In contemplating The Homecoming and its purpose I believe that the play poses the question "Can women in a misogynistic society ever gain true equality on any level as long as the underlying attitude allows the ideas, but never aggress or conforms to them.", rather than delivering a clear message that is not open to interpretation. The feminist level of the play and its connotations is best described by the playwright himself: Harold Pinter: "At the end of the play she's (Ruth) in possession of a certain kind of freedom" Elliott Holland 01/05/2007 Is The Homecoming a feminist play? 1 ...read more.