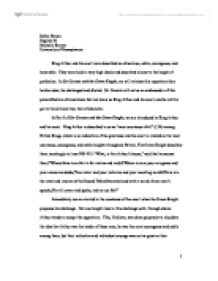 Sir Gawain and the Green Knight

Robin Brown English 20 Michelle Karnes University of Pennsylvania King Arthur and his court were described as chivalrous, noble, courageous, and honorable. They were held to very high ideals and described almost to the height of perfection. In Sir Gawain and the Green Knight, we will witness this reputation they hold so dear, be challenged and diluted. Sir Gawain will act as an ambassador of this personification of excellence that we know as King Arthur and his court, and he will be put to the ultimate test, that of character. In Part I of Sir Gawain and the Green Knight, we are introduced to King Arthur and his court. King Arthur is described to us as "most courteous of all" (l.26) among British Kings, which is an indication of his greatness and his court is reveled as the most courteous, courageous, and noble knights throughout Britain. The Green Knight describes them mockingly in lines 309-315: "What, is this Arthur's house," said that horseman then,/"Whose fame is so fair in far realms and wide?/Where is now your arrogance and your awesome deeds,/Your valor and your victories and your vaunting words?/Now are the revel and renown of the Round Table/Overwhelmed with a word of one man's speech,/For all cower and quake, and no cut felt!" Immediately we are alerted to the weakness of the court when the Green Knight proposes his challenge. Not one knight rises to this challenge until, through shame Arthur stands to accept the opposition. ...read more.

Gawain will prove himself in these virtues for the most part, but we will see that he does not exemplify perfection in them as his reputation suggests he would. Sir Gawain has held true to his word to the Green Knight so far and his intentions of finding the Knight are strong. Unbeknownst to him, however, this most courteous host that he has happened across is the Green Knight himself, in disguise. He makes a pact with this hospitable man that everyday, Bertilak will go hunting and Gawain will remain at the castle. Whatever Bertilak earns on his trip he will give Gawain and whatever Gawain earns at home, he will give Bertilak. This is a rather odd pact to be made between the host and Sir Gawain, as Gawain would probably not expect to earn much when he will be doing no labor, but Gawain agrees without question because he is obliged to respect his host, another knightly virtue that he displays, but not completely, as this test will show. With the help of Lady Bertilak, the Green Knight will test Gawain's chivalrous nature and his word to keep to the pact made at the beginning of his stay. Each day Lady Bertilak will try and seduce Gawain, she will use his knightly reputation to manipulate him and each day he will use his gift for flattery to get him out of the situation. One example of how Lady Bertilak uses Gawain's reputation against him is in lines 1293 and 1297-1301. ...read more.

Gawain is shocked, but hold's the Green Knight to his word of one strike. The Green Knight explains that he is Bertilak the hospitable castle dweller and he has been putting Gawain and the reputation of King Arthur's court to the test from the inception of the initial challenge. He explains that although Gawain failed his reputation and that of King Arthur's court, he understands why; "Yet you lacked, sir, a little loyalty there, /But the cause was not cunning, nor courtship either, /But that you loved your own life; the less, then to blame." (l.2366-2368) To try and save his pride, Gawain blames Lady Bertilak for his demise. This is just more proof that Gawain is only human; he has failed; yet he doesn't want to admit his failure and take complete responsibility for it. His identity lies with his reputation and without it he would probably rather perish. Sir Gawain now bears a scar on his neck, a reminder that he is not perfect, nor is King Arthur or the rest of the court. Sir Gawain bore this humanizing experience for his comrades and almost succeeded. It exemplified the fact that this reputation they held was impossible to fulfill for any human. We all fear at some point in our lives, whether we want to or not, and we all have feelings and thoughts that would not be conducive to a good reputation. Yet, we are all in control of our actions and we must not let our desires affect our integrity, as Gawain found out. 1 ...read more.