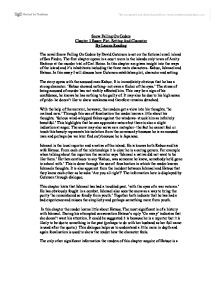 Snow Falling On Cedars Chapter 1 Essay: Plot, Setting And Character By Lauren Reading The novel Snow Falling On Cedars by David Guterson is set on the fictional small island of San Piedro. The first chapter opens in a court room in the islands only town of Amity Harbour at the murder trial of Carl Heine. In this chapter are given insight into the ways of the island and it's inhabitants including the three main characters- Kabuo, Ishmael and Hatsue. In this essay I will discuss how Guterson establishes plot, character and setting. The story opens with the accused man Kabuo. It is immediately obvious that he has a strong character: 'Kabuo showed nothing- not even a flicker of the eyes.' The stress of being accused of murder has not visibly affected him. This may be a sign of his confidence, he knows he has nothing to be guilty of. It may also be due to his high sense of pride- he doesn't like to show weakness and therefore remains detached. With the help of the narrator, however, the readers get a view into his thoughts. ...read more.

During his attempted conversation Hatsue's reply 'Go away' indicates that she doesn't want his attention. It could be suggested it is because he is a reporter but it is likely to be due to something in the past (perhaps to do with her husband as her full name is used after the quote.) This dialogue helps us to understand a little more in depth and again focalisation is used to show the reader how the character feels. The only other significant information the readers of this chapter acquire of Hatsue is a hint at emotional state. 'how rigorously her had been woven into a black knot against the nape of her neck.' This indicates that she may be both angry and anxious about her husbands trial. This is another point taken from a focalisation of Ishmael. The history of the island is briefly summarised to show how significant the trial is. 'San Piedro generally lay clear of violence after that.' The island is not used to something as large as this and therefore everyone is interested- especially in making their own opinions, much like the reader is encouraged to do. ...read more.

Each of these points are established through the use of the omniscient narrator. Guterson uses a variety of language techniques including alliteration, personification and imagery especially to describe the setting. His technique of providing fictional information, masquerading as fact, is used to explain the history of the island, but ultimately it is all communicated through the omniscient narrator. The narrator also allows us to find out how each character is feeling at specific moments, helping us to learn about them through the technique of focalisation. This is highly significant to the plot as it allows the readers to get a 'bird's eye perspective' of what's going on - we're given all of the information from all sources. This therefore means we can piece together the information to imagine the scene without a biased and incomplete perspective. So in overview it is apparent that Guterson uses a variety of means and devices to illustrate and convey character, setting and plot in the early pages. This is particularly necessary when seeking to engage the readers imagination and curiosity, weather to heighten the enjoyment of the read, or at least to finish the novel. ?? ?? ?? ?? ...read more.