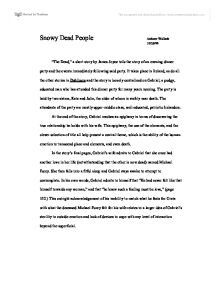 Snowy Dead People Andrew Walleck 10/28/99 "The Dead," a short story by James Joyce tells the story of an evening dinner party and the events immediately following said party. It takes place in Ireland, as do all the other stories in Dubliners and the story is loosely centralized on Gabriel; a pudgy, educated man who has attended this dinner party for many years running. The party is held by two sisters, Kate and Julia, the elder of whom is visibly near death. The attendants of the party are mostly upper-middle class, well-educated, patriotic Irelanders. At the end of the story, Gabriel reaches an epiphany in terms of discovering the true relationship he holds with his wife. This epiphany, the use of the elements, and the clever selection of title all help present a central theme, which is the ability of the human emotion to transcend place and elements, and even death. In the story's final pages, Gabriel's wife admits to Gabriel that she once had another love in her life (notwithstanding that the other is now dead) named Michael Furey. She then falls into a fitful sleep and Gabriel stays awake to attempt to contemplate. ...read more.

After forcibly being exposed to real feelings and emotion from his wife, he is also forcibly exposed to the elements: (limited as they may be inside a hotel room) "The air in the room chilled his shoulders. He stretched himself cautiously along the sheets and lay down beside his wife," (page 152.) So instead of pulling on an overcoat or bundling up in some other way like the Gabriel in the beginning of the story would, he allows himself to be exposed and deals with the cold. This compassion allows Gabriel to "move" beyond the hotel room, as we see at the end of the story his viewpoint pulls back to take into full view all that surrounds him instead of limiting his view to only himself, as he seems accustomed: "He watched sleepily the flakes, silver and dark, falling obliquely against the lamplight. The time had come for him to set out on his journey westward. Yes, the newspapers were right: snow was general all over Ireland. It was falling on every part of the dark central plain, on the treeless hills, falling softly upon the Bog of Allen and, farther westward, softly falling into the dark mutinous Shannon waves..." ...read more.

Also, the observation that "snow was general all over Ireland," upon "all the living and the dead," (page 152,) serves to physically link the two, and augments the connection previously mentioned. Another image in the story's close worth examining is the graveyard seen in the final paragraph: "It was falling, too, upon every part of the lonely churchyard on the hill where Michael Furey lay buried. It lay thickly drifted on the crooked crosses and headstones, on the spears of the little gate, on the barren thorns." The image of a cross- upon which the Catholic God Jesus Christ was martyred is a link to the death of Michael Furey- he martyred himself for the sake of Greta's love. So in conclusion, the somewhat ambiguous but clever use of title, the epiphany that Gabriel reaches and the imagery of the elements all contribute to the overriding theme of the ability of the human beings' emotion to transcend place and elements, and even death. The final image of the graveyard and the use of title also contribute to a more minor but still present theme of the proximity between the living and the dead. ...read more.