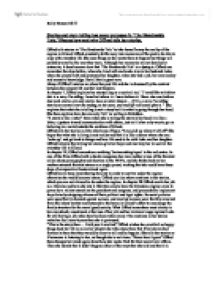 Stories and story telling has many purposes in 'The Handmaids Tale.' Discuss how and why Offred tells her stories.

Stories and story telling has many purposes in 'The Handmaids Tale.' Discuss how and why Offred tells her stories. Offred tells stories in 'The Handmaids Tale' to take herself away the reality of the regime in Gilead. Offred constantly drifts away into memories of the past to be able to cope with everyday life. She sees things as she wants them to happen but things will probably never be the way they were. Although her memories are not detailed or extensive, it does become clear that 'The Handmaids Tale' is a dystopia. Offred can remember the days before, when she lived with and made love to her husband Luke; when she played with and protected her daughter, when she had a job, her own money and access to knowledge. But all that is gone now. Many of Offred's stories are about her past life and she is obsessed by the contrast between her present life and her lost freedom. ...read more.

Offred tells her stories as little rebellions of hope; "I can pick up where I left off" She hopes that what she is living is not reality and that it is like a dream where she can 'wake up' and go back to things and how life used to be with Luke and her daughter. Offred believes that telling her stories give her hope and also help her to survive the everyday life in Gilead. In chapter 20, Offred remembers watching 'brainwashing tapes' in the red centre. In one of the films Offred with a shock recognises her own mother at one of the feminist rallies about p*********y and abortion in the 1970's, and she thinks back to her mothers staunch feminist stance as a single parent, wishing that she could have those days of comparative freedom back again. Offred has to keep remembering her past in order to survive under the regime otherwise she would become insane. ...read more.

She tells her stories as if someone is listening to her, as though she is not alone. "Heres how it goes" Offred then changes her mind again about how she meets Nick for their secret love affairs. Then she admits that it didn't happen either of the ways that she told and that it is difficult to describe love, how she feels towards Nick, she later admits to wanting to be with him, wishing that the child she needs to create is with him. Overall I think that Offred tells her stories to release emotions, which she cannot express whilst in the Gileadean regime. Also to survive the everyday life of as Handmaid and to still have the hope that, one day she will go back to her past life and have the freedom to do, as she likes. Kelly Hanson DS 11 ...read more.