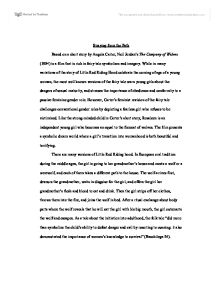 Straying from the Path

Straying from the Path Based on a short story by Angela Carter, Neil Jordan's The Company of Wolves (1984) is a film that is rich in fairy tale symbolism and imagery. While in many variations of the story of Little Red Riding Hood celebrate the coming of age of a young woman, the most well known versions of the fairy tale warn young girls about the dangers of sexual maturity, and stresses the importance of obedience and conformity to a passive feminine gender role. However, Carter's feminist revision of the fairy tale challenges conventional gender roles by depicting a fearless girl who refuses to be victimized. Like the strong-minded child in Carter's short story, Rosaleen is an independent young girl who becomes an equal to the fiercest of wolves. The film presents a symbolic dream world where a girl's transition into womanhood is both beautiful and terrifying. There are many versions of Little Red Riding hood. In European oral tradition during the middle ages, the girl is going to her grandmother's house and meets a wolf or a werewolf, and each of them takes a different path to the house. The wolf arrives first, devours the grandmother, waits in disguise for the girl, and offers the girl her grandmother's flesh and blood to eat and drink. Then the girl strips off her clothes, throws them into the fire, and joins the wolf in bed. ...read more.

The priest, a respected authority figure within the village, gives a sermon that exemplifies this view: PRIEST: Isaiah, chapter eleven, verses six to eight. "The wolf also shall dwell with the lamb, and the leopard shall lie down with the kid, and the calf and the young lion and fatling together, and the little child shall lead them. And the cow and the bear shall feed their young ones together. And the lion shall eat straw with the ox, and the suckling child shall play on the whole of the ass, and the weaned child shall put his hand on the cockatrice's den. They shall not hurt nor destroy in all my holy mountain, for the earth shall be full of the knowledge of the Lord, as the waters cover the sea. Civilized society marginalizes the wolf out of fear and distances itself from nature because it cannot accept that death and destruction as an inherent part of the natural cycle. Predators have an integral, albeit unpleasant role to play in the natural world. It is unrealistic to expect the lion to eat straw like the ox because it goes against its nature. The ridiculous sermon can also be read as a critique on institutionalized religion's fear of human sexuality. Predators like the wolf, leopard, and lion symbolize sexual libido and the animalistic nature of sex. ...read more.

(Lappas 121) Unlike Perrault and Grimm's version of the fairy tale, Rosaleen is not punished for straying from the path or acting on her desires. Instead of being a passive victim who is devoured by the wolf or rescued by a huntsman, Rosaleen is an autonomous young woman who embraces her otherness and becomes a wolf herself. In the end, it is Rosaleen's mother, the person who understands her the most, who recognizes Rosaleen as a wolf and stops the her from shooting. Rosaleen and her new companions run through the forest. The dreaming and waking worlds collapse together when the wolves crash through into the bedroom where Rosaleen is sleeping, knocking over her toys in the process. This represents the destruction of childhood as Rosaleen grows up, and she wakes up to the horrors of puberty. Rosaleen dreams of a self that is autonomous and in control. Within her dream, she strays from the path, and as a result, becomes empowered and establishes her own identity as a woman. Yet, the film does not end on a happy note. Perhaps Rosaleen's scream represents what she will have to sacrifice in order to become an adult, and the fear of the uncertainty of growing up. The wolves destroy her toys, but whether the wolves will harm Rosaleen is withheld from the ending. Rosaleen successfully negotiates her transition into womanhood within the safe confines of her dream. But whether she will get through her adolescence unscathed within the waking world is uncertain. ...read more.