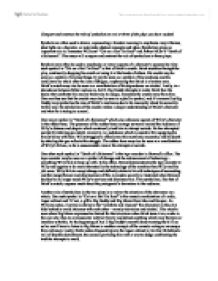 Symbolism plays an important role in Tennessee Williams' &quot;Cat on a Hot Tin Roof&quot; and Arthur Miller's &quot;Death of a Salesman&quot;. This essay will compare and contrast the role of symbolism in these plays.

The rubber hose may also be seen as a manifestation of w***y's failure, as he is unsuccessful even at his attempts at suicide. One other such symbol in "Death of a Salesman" is the tape recorder in Howard's office. The tape recorder may be seen as a symbol of change and the advancement of technology - something w***y fails to keep up with. In his office, Howard demonstrates the tape recorder to w***y and appears to be more interested in the technology of the machine than w***y and his job woes. w***y fails to accept change and defiantly sticks to his old techniques of succeeding, and the insignificance and obsolescence of this in modern society is illustrated when Howard decides he no longer needs w***y's services and dismisses him. This symbolism, like that of Brick's crutch, exposes much about the protagonist's characters to the audience. Another role of symbolism in the two plays is to mirror the situation of the characters as a whole. ...read more.

CHARACTER, VICES, REVELATIONS...BUT ALSO SITUATION OF FAMILY Another symbol in "Death of a Salesman" are the seeds w***y plants in an attempt to grow vegetables. These represent the ability to provide and nurture for his family, and w***y's desperate attempts to cultivate them signify his shame at struggling to do so. He strives to achieve something which he will be able to leave behind so people will remember him yet soon realises that it may be too late to do so, in Act I remarking that "The grass don't grow anymore, you can't raise a carrot in the backyard". Moreover, the surrounding buildings which have boxed in w***y's "small, fragile" house now make it impossible for sufficient light to shine through to the garden and stimulate growth, the changing society making success impossible for those who do not keep up. Lastly, one of w***y's last acts in life is another fruitless attempt at planting seeds. That the seeds will never germinate in the inhospitable conditions ultimately symbolise how w***y and his family have failed to grow to full maturity and comfort in the inhospitable society. CHARACTER, FAILURE ...read more.