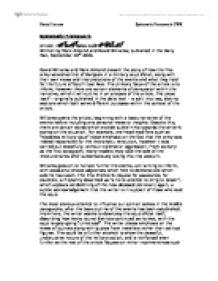 Systematic Framework Article: The army takes over in Thailand Written by Mark Almond and David Williams; published in the Daily Mail, September 20th 2006 David Williams and Mark Almond present the story of how the Thai army seized control of Bangkok in a military coup d'etat, along with their own views and interpretations of the events and what they hold for the future of South East Asia. The primary focus of the article is to inform, however there are certain elements of persuasion within the narrative, which I will outline in an analysis of the article. The piece itself - originally published in the daily mail - is split into two, distinct sections which both serve different purposes within the context of the article. Williams opens the article, beginning with a basic narrative of the events before including any personal views or insights. Despite this, there are certain words which provide subtle hints towards the writer's stance on the situation. ...read more.

From the first paragraph, Almond gives a report which contrasts the first in both the way it is written and the information it presents. Describing what we have already been told was a peaceful operation with full public support as "political turmoil" involving "corruption and cronyism on a massive scale." The use of more dramatic wording in the headline and opening paragraph immediately show us that this writer holds a drastically different opinion. He begins by drawing words from a semantic field of paradise, creating an association with Thailand as a peaceful, exotic place through use of pre-head modifiers such as "vibrant" or "tropical". This effectively creates a stark contrast to the Thailand which Almond goes on to describe, again using words like "chaos", "unrest" and "sudden turmoil" to create a semantic association with the country as a nation turned upside down by political strife. The use of discourse markers prompts the reader take their own stance on the situation, in contrast to the earlier section of the article in which the writer uses subtle persuasive techniques to bring us to his way of thinking. ...read more.

Almond goes into much more detail, using mostly compound and complex sentences which are more suited to a persuasive style. In the rare instance that a shorter sentence is used, it is done for emphasis, as can be seen in one-sentence paragraphs that contain a single, rhetorical question. Almond's comments are mostly declarative; one example being "Thailand is no longer in any position to serve as a role model". Numerous comments along these lines make the writer's comments appear as fact, giving a sense of authority to his opinions. The use of two different writers using contrasting styles is effective in providing two points of view from contrasting perspectives. As well as this, the reader is able to find a narrative of the events in summary-form, before going on to read a more detailed analysis of the events. The articles contrast not only in the point of view they give, but also in the framework, language and techniques used to present the writers' opinions. Daniel Larrosa Systematic Framework CWK ...read more.