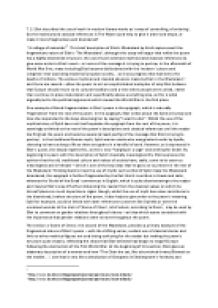 T. S. Eliot described the use of myth in modern literary works as a way of controlling, of ordering. Do the mythical and classical references in The Waste Land help to give it order and shape, or make it more fragmentary and disordered?

Transfer-Encoding: chunked ﻿T. S. Eliot described the use of myth in modern literary works as ?a way of controlling, of ordering?. Do the mythical and classical references in The Waste Land help to give it order and shape, or make it more fragmentary and disordered? ?A collage of materials?[1]. This brief description of Eliot?s Wasteland by Kroll captures well the fragmentary nature of Eliot?s ?The Wasteland?, although this essay will argue that whilst the poem has a highly-disordered structure, the use of such extensive mythical and classical references do give some order to Eliot?s work ? in terms of the message it is trying to portray. In the aftermath of World War One, many including Eliot became disillusioned with the ?modern? culture and ?progress? that was being made by European society? as it was progress that had led to the deaths of millions. ...read more.

of the message that Eliot is trying to portray[2]. In the traditional Roman myth, Sybil was an oracle who was granted a wish by Apollo, choosing to have as long a life as there are grains in a handful of sand. However, as is expressed in Eliot?s quote, she deeply regrets this, as she is now ?hanging in a cage? and wishing for death. By beginning his poem with this description of Sybil?s basically meaningless life, Eliot expresses his opinion that the old, traditional culture and values of society have, sadly, come to be seem as meaningless and irrelevant ? which is one of the key ideas that he goes on to present in the rest of the Wasteland. Thinking back to how the use of myths such as that of Sybil make the Wasteland disordered, this epigraph is further fragmented by the fact that it is written in Greek and ...read more.

The section a ?Game of Chess?, the second of the Wasteland, provides a primary example of the fragmented nature of Eliot?s poem ? with the shifting voices, evident use of classical stories and links to other mythical figures not only being confusing for the reader but making the poem?s structure quite chaotic, reflecting the chaos that Eliot believed had begun to engulf Europe following the destruction of the First World War. At the beginning of this section, Eliot gives an elaborate description of a woman and how ?The Chair she sat, like a burnished throne/Glowed on the marble??, one that is very like a description of Cleopatra in Shakespeare?s ?Anthony and Cleopatra?. Other women who are referenced in this section include Philomena, who changed herself into a nightingale to escape the king who had raped her and Ophelia from Hamlet, with the repetition of ?Goodnight? at the conclusion of the section echoing her final words before she drown herself. ...read more.