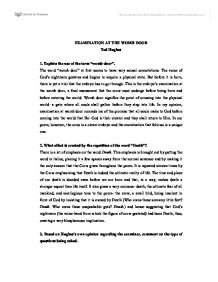 EXAMINATION AT THE WOMB DOOR Ted Hughes 1. Explain the use of the term "womb-door". The word "womb door" at first seems to have very s****l connotations. The voice of God's nightmare gestates and begins to acquire a physical state. But before it is born, there is yet a trial that the embryo has to go through. This is the embryo's examination at the womb door, a final assessment that the crow must undergo before being born and before entering the world. Womb door signifies the point of crossing into the physical world- a gate where all souls shall gather before they step into life. In my opinion, examination at womb door reminds me of the promise that all souls make to God before coming into the world that He- God is their creator and they shall return to Him. In our poem, however, the crow is a clever embryo and the examination that follows is a unique one. 2. What effect is created by the repetition of the word "Death"? ...read more.

4. Why at the end does Crow feel that he is stronger than Death? Alan Garner put forward a very interesting theory in his book, The Guizer. He says that if we can name the various emotions found in each one of us like the Queen, Hero, Child, Father etc then the emotion that rules all of us is of the Fool. For the Fool is the advocate of uncertainty: he is at once creator and destroyer, bringer of help and harm. Garner has called him Guizer. Guizer is the proper word for an actor in a miming play. He is comical, grotesque, stupid, cunning and ambiguous. In the light of this we can see startling similarity between Hughes's Crow and the Fool. In Crow, Hughes not only redefined God, he adopted Biblical language and style. Crow was subjected to teaching and to tests, he was meant to learn humanity and wholeness, to develop a soul. My personal opinion is that Crow is the mockery of human soul in a sense because God created humans and He created their souls. ...read more.

The poem seems to be formed around the catechism3 format. The first part of the poem mentions various parts of the Crow the scrawny feet, guts, brains, muscles etc and towards the end of the poem we get an amalgamation of the body parts when the Crow says Me. In the first part of the poem, Death is only mentioned in the Crow's replies. However, in the last part the word Death is part of a question (But who is stronger than Death?). In the beginning the sentences are comparatively longer however the last verse consists of only two words (Pass, Crow.) ________________________________________ "Crow is Everyman who will not acknowledge that everything he most hates and fears - The Black Beast - is within him" - Sagar 1 The relation been already made in the answer to Question 2. 2 As already mentioned before in answer to Question 2. 3 Catechisms are doctrinal manuals often in the form of questions followed by answers to be memorized, a format that has been used in non-religious or secular contexts as well. ...read more.