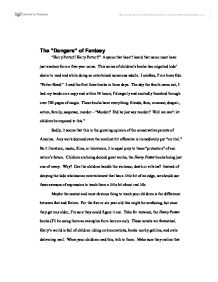 The "Dangers" of Fantasy "Harry Potter!! Harry Potter!!" Anyone that hasn't heard that name must have just awoken from a five-year coma. This series of children's books has reignited kids' desire to read and while doing so entertained numerous adults. I confess, I'm a bona fide "Potter-Head." I read the first three books in three days. The day the fourth came out, I had my hands on a copy and within 36 hours, I'd eagerly and excitedly thumbed through over 700 pages of magic. These books have everything: friends, foes, romance, despair, action, family, suspense, murder - "Murder? Did he just say murder? Well we can't let children be exposed to this." Sadly, it seems that this is the growing opinion of the conservative parents of America. Any work deemed even the smallest bit offensive is immediately put "on trial." Be it literature, music, films, or television, it is equal prey to these "protectors" of our nation's future. Children are being denied great works, the Harry Potter books being just one of many. ...read more.

Simply explain to them that in the real world, brooms are made for sweeping, owls for catching mice, and goblins for hiding under the bed. Let the kids know that books are for fun, just like television. Once the children realize this difference, it'll be easy for them to understand that this fantasy world has a bad side, as well. In the Harry Potter stories, it's not only the bad guy that is under fire; the entire concept is under fire. Christianity has looked down upon wizardry and witchcraft since the beginning of time. This automatically puts it into the "offensive" category for many, seeing as how this religion accounts for about 75% of the population. Sorcery is the work of the devil, according to their beliefs. Seeing how murder, infidelity, theft, immorality, and profanity are also attributed to the devil, I guess we should mask our children's eyes and tape up their ears to guard them from the real world in which they live. Things such as sorcery in a world where good guys win should be a welcome outlet for children that live in a world full of unimaginable evils. ...read more.

A few years ago, when my grandmother passed, my brother was only six years old. It was really painful having to explain to him how she's gone and she won't be coming back. Such a deep subject may be vast and confusing for such a small mind. If more children had a chance to experience it on a much smaller level in a book, or movie, this would open up an avenue for the parent to discuss it with them. Once they have some sort of grasp of this concept, they may be able to handle a real death in a more mature fashion. Harry Potter books are just one example of works that come under scrutiny by conservatives in our country. I once heard the expression "if life hands you a lemon, make some lemonade." If you are served something disagreeable, do what you can to turn it into something positive. This is what some concerned parents should do with these books, or any form of expression they don't agree with. Can you think of a better way to get your eight year-old to read a 700-page novel? ...read more.