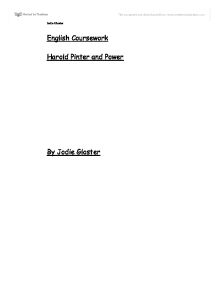 'The Birthday Party' by Harold Pinter is a study of power- where it comes from and how it is wielded.' Discuss with particular reference to Act One.

English Coursework Harold Pinter and Power By Jodie Gloster 'The Birthday Party' by Harold Pinter is a study of power- where it comes from and how it is wielded.' Discuss with particular reference to Act One. The Birthday Party is a play right written by Harold Pinter. The play is based on power. The dictionary definition of power is' The ability to act or produce an effect' or 'possession of control, authority, or influence over others' In the play there are several characters. These include Petey, a man in his sixties and his wife Meg, who is also in her sixties. Stanley is a man in his late thirties and a guest at Petey's and Meg's hotel. Goldberg and McCann then later become guests. Goldberg is a man in his fifties and McCann is a man of thirty. Lulu occasionally visits in the play; she is a young lady in her twenties. In the play right everyone seems to have power over everyone at some point apart from Meg and Lulu. From the start of Act One Petey pays no attention to Meg. He reads his newspaper and acts really disinterested towards her. ...read more.

Stanley is shocked and doesn't make any attempts to resume any power that is seen earlier on in this play. They use enough power to scare him but yet Goldberg's and McCann's power is actually stronger than what is shown on these particular pages of the play. Although, McCann and Goldberg have power over Stanley, Goldberg still has power over McCann. McCann does exactly what he is told and never questions Goldberg. McCann could be seen as a sidekick for McCann. You get the impression that without Goldberg, McCann would be a very weak character. Lulu is a minor character and doesn't really have time to have any power but Goldberg does later in Act II have power over Lulu. Goldberg seduces her and she is infatuated with him. This is another type of power - Seduction. This is shown in pages 57-62. It especially shown that she has feeling with him when she turns to him and says "I like older man. They can soothe you." By saying this Lulu has just let Goldberg know that he has power over her totally. I think Stanley likes to behave as if he is very powerful but in fact he is not. ...read more.

And there have been many interpretations in the many showings of it since it was written. Pinter's use of theatrical devices is good. When he wrote this play, it is totally obvious that from his strong but clear stage directions. I noticed that he uses a lot of pauses and silence which builds up a lot of tension and there is a lot of tension in this play. He makes Petey a sort of silent character in pages 4-8 when he is very disinterested in Meg. Another theatrical device that Pinter uses is detailed stage directions. He actually displays power himself here, as the writer. He makes sure that when performed the play is done exactly how he wants it to be done when this is performed in a theatre. This also demonstrates his liking in power. Throughout the whole of this play it becomes more and more obvious that power is an interest of Pinter's. He shows realistically how he can use power even though he is not a character and shows how power can be lost and gained quite easily. Although I found the play boring it has an obvious moral about power and he would like it to teach the country that giving certain people too much power will create havoc. This I found interesting. Jodie Gloster ...read more.