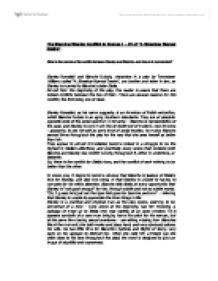 The Blanche/Stanley Conflict in Scenes I - IV of &quot;A Streetcar Named Desire&quot;. What is the nature of the conflict between Stanley and Blanche, and how is it represented?

The Blanche/Stanley Conflict in Scenes I - IV of "A Streetcar Named Desire" What is the nature of the conflict between Stanley and Blanche, and how is it represented? Stanley Kowalski and Blanche Dubois, characters in a play by Tennessee Williams called "A Streetcar Named Desire", are brother and sister in law, as Stanley is married to Blanche's sister Stella. Almost from the beginning of the play, the reader is aware that there are indeed conflicts between the two of them. There are several reasons for this conflict, the first being one of class. Stanley Kowalski, as his name suggests, is an American of Polish extraction, whilst Blanche Dubois is an aging Southern debutante. They are at absolute opposite ends of the social spectrum in America - Blanche is representative of the past, and Stanley is very much the embodiment of modern, new America - appearing to see himself as some kind of social leveller, he mocks Blanche several times throughout the play for the way that she sees herself as better than him. They appear to almost immediately become locked in a struggle to be the highest in Stella's affections, and practically every scene that contains both Blanche and Stanley has conflict running throughout it, either in undertone, or blatantly. ...read more.

Stanley later deliberately ignores the request when he realises that Blanche has outwitted him during a discussion of what has happened to his wife's family home. After rifling through her personal possessions, he throws the news at Blanche, as a calculated move. Stella, her fertility and youth and the birth of their future contrasts sharply with Blanche's sensation of herself as drying out, fading away, losing her youth. The conflict soon deepens and becomes more than being about class and family. In scene three, we see Stanley becoming enraged when he perceives that he is not only losing Stella to Blanche, but that she is also beginning to 'make a move' on his oldest and closest friend Stanley, and so the conflict gains another strand, the struggle for Mitch's loyalty. The men are playing poker at Stanley and Stella's apartment, and Stanley refuses his wife's request that they end the game. The women retire to the bedroom to talk, and turn on a radio. Stanley shouts through that they should turn it off, and his friends disagree with him. Saying that it should stay on, they side with Stella and Blanche, and Stanley, angry, goes into the bedroom and turns it off. ...read more.

The women wait to speak, and when the train is at its loudest (grating, raucous, booming) Stanley enters the apartment unheard and unseen by the women, and listens to the tirade against him by Blanche. This technique, an intense form of dramatic irony, is used to brilliant effect, as the audience hears Blanche raving against Stanley - " he acts like an animal, has an animals habits - eats like one, talks like one, moves like one" - and realises that she has no idea that he is there, listening. The train is used once more, when Stanley exits the apartment under cover of the noise. After it is passes, he calls to Stella, she rushes to greet him and he embraces her in full view of Blanche, grinning triumphantly at her over Stella's shoulder. The lights fade, after a lingering brightness on the embracing man and wife, and the piano bar music is once again prominent - the victorious sound of drums and trumpet. So, in conclusion, the conflict is illustrated in many ways. Some obviously, through the use of language differences, sexuality, gender, loyalty - and some not so obvious; lighting, sounds, shadows. Together as a whole, the audience of the play is left in no doubt as to the strength of it. ...read more.