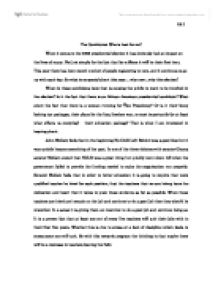 The Candidates: Who is best for me?

The Candidates: Who is best for me? When it comes to the 2008 presidential election it has obviously had an impact on the lives of many. Not just simply for the fact that for millions it will be their first time. This year there has been record number of people registering to vote, and it continues to go up with each day. So what is so special about this year... why now...why this election? What do these candidates have that is causing the public to want to be involved in the election? Is it the fact that there is an African American presidential candidate? What about the fact that there is a woman running for Vice Presidency? Or is it their fancy looking tax packages, their plans for the Iraq freedom war, or most importantly (or at least what effects us everyday) their education package? That is what I am interested in hearing about. John McCain feels that in the beginning No Child Left Behind was a good idea but it was quickly became something of the past. ...read more.

Senator Barack Obama feels that No Child Left Behind "left the funding behind". Has a plan called the Zero to Five plan for children from the ages of zero to five. This plan calls for affordable high quality childcare and dedicated caring compassionate care givers. Obama feels that teachers should not be forced to spend the year preparing students for the typical "standardized tests" - (Lest face it just about EVERYONE can fill in a BUBBLE!) that lump the students of this county into various categories. Obama and Biden intend to focus more on math and science as a whole to raise the national scores. They plan to recruit teachers of the math and science fields who were in the top of their classes. After they raise the scores they plan to attack the drop out rate. They are going to make things more readily available to the students so the students feel that there is another option. When it comes to keeping the teachers Obama's plan is about the same as McCain's he has come up with a way to reward the teachers. ...read more.

If and when I must become involved though I like to be sure that I am well educated on the subjects at hand. I like to make sure that I know all the facts possible before I open my big mouth. I feel that is the problem with a fair percentage of today's population. We continue to push people to get out there and vote vote voet voet ..... But do they even know what they are supporting? What they are really voting for? What the candidate they are voting for is supporting or pushing through? So it is with this little note that I leave you, consider this the next time you hear one of those ads telling someone to get up off their rear and get out there and do their duty and vote... Do you really want that person making and "uneducated guess" as to what they are supporting. Maybe instead of parading all the fancy ads around bashing each other and trying to degrade each other the presidential candidates should spend a little more time trying to educate the American people on just what it is that they stand for. The TRUE meaning . ...read more.