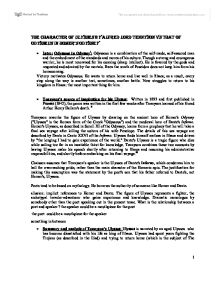 The character of Ulysses by Alfred Lord Tennyson VS that of Odysseus in Homer's odyssey * Intro: Odysseus in Odysseyi: Odysseus is a combination of the self-made, self-assured man and the embodiment of the standards and mores of his culture. Though a strong and courageous warrior, he is most renowned for his cunning (sharp intellect). He is favored by the gods and respected and admired by the mortals. Even the wrath of Poseidon does not keep him from his homecoming. Victory motivates Odysseus. He wants to return home and live well in Ithaca; as a result, every step along the way is another test, sometimes, another battle. Now struggles to return to his kingdom in Ithaca: the most important thing for him. * Tennyson's source of inspiration for his Ulysses: Written in 1833 and first published in Poems (1842), the poem was written in the first few weeks after Tennyson learned of his friend Arthur Henry Hallam's death. ii Tennyson reworks the figure of Ulysses by drawing on the ancient hero of Homer's Odyssey ("Ulysses" is the Roman form of the Greek "Odysseus") and the medieval hero of Dante's Inferno. Homer's Ulysses, as described in Scroll XI of the Odyssey, learns from a prophecy that he will take a final sea voyage after killing the suitors of his wife Penelope. ...read more.

He has enjoyed all his experiences as a sailor who travels the seas, and he considers himself a symbol for everyone who wanders and roams the earth. His travels have exposed him to many different types of people and ways of living. They have also exposed him to the "delight of battle" while fighting the Trojan War with his men. Ulysses declares that his travels and encounters have shaped who he is: "I am a part of all that I have met," he asserts. And it is only when he is traveling that the "margin" of the globe that he has not yet traversed shrink and fade, and cease to goad him.iv He knows he does not have much life left so what is the point in living there? Lines 30-1-2: sinking star : represents death. He can never reach knowledge but he doesn't want to stop traveling. Is knowledge that of death or the desire to travel? He wishes "to follow knowledge like a sinking star" and forever grow in wisdom and in learning. v Next stanza: talks about his son. Ulysses now speaks to an unidentified audience concerning his son Telemachus, who will act as his successor while the great hero resumes his travels: he says, "This is my son, mine own Telemachus, to whom I leave the scepter and the isle." ...read more.

As in all dramatic monologues, here the character of the speaker emerges almost unintentionally from his own words. Ulysses' incompetence as a ruler is evidenced by his preference for potential quests rather than his present responsibilities. He devotes a full 26 lines to his own egotistical proclamation of his zeal for the wandering life, and another 26 lines to the exhortation of his mariners to roam the seas with him. However, he offers only 11 lines of lukewarm praise to his son concerning the governance of the kingdom in his absence, and a mere two words about his "aged wife" Penelope. Thus, the speaker's own words betray his abdication of responsibility and his specificity of purpose. And while on the one hand we have a true hero craving for his home in an extended definition of the word (homeland, family, subjects) here, we have some one who is eager to leave Ithaca because it is a place no more familiar to him, having lost ties with family members and his land, he just misses traveling which of course he finds extremely exciting as contrasted with the -as he sees it-boring life in Ithaca. i http://www.sparknotes.com/lit/odyssey/summary.html ii http://www.victorianweb.org/authors/tennyson/ulysses.html iii http://www.sparknotes.com/poetry/tennyson/section4.rhtml iv http://www.sparknotes.com/poetry/tennyson/section4.rhtml v Ibid. vi Ibid. vii http://www.victorianweb.org/authors/tennyson/kincaid/ch3.html viii http://en.wikipedia.org/w/index.php?title=Ulysses_%28poem%29&oldid=86143736 ix Ibid. ?? ?? ?? ?? 1 ...read more.