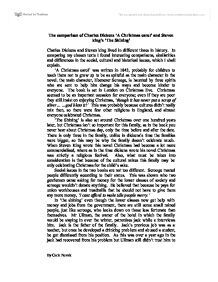 The comparison of Charles Dickens 'A Christmas carol' and Steven king's 'The Shining' Charles Dickens and Steven king lived in different times in history. In comparing my chosen texts I found interesting comparisons, similarities and differences in the social, cultural and historical issues, which I shall explain. 'A Christmas carol' was written in 1843, probably for children to teach them not to grow up to be as spiteful as the main character in the novel. the main character, Ebenezer Scrooge, is haunted by three spirits who are sent to help him change his ways and become kinder to everyone. The book is set in London on Christmas Eve. Christmas seemed to be an important occasion for everyone; even if they are poor they still insist on enjoying Christmas, 'though it has never put a scrap of silver... ...god bless it!' This was probably because cultures didn't really mix then, so there were few other religions in England, and almost everyone celebrated Christmas. ...read more.

He believed that because he pays for union workhouses and treadmills that he should not have to give them any more money, 'I cant afford to make idle people merry.' In 'the shining' even though the lower classes now get help with money and jobs from the government, there are still some small mined people, just like scrooge, who looks down on those less fortunate than themselves. Mr Ullman, the owner of the hotel in which the family would be staying in over the winter, patronizes jack while e interviews him. Jack is the father of the family. Jack's previous job was as a teacher, but once he developed a drinking problem and abused a student, he got dismissed from his position. As this was over a year ago in the jack had recovered from his problem but Ullman still didn't trust him to take care of his hotel over the winter, 'your last position of trust, you lost your temper, I don't believe we need to say any more.' ...read more.

The film industry had also developed a interest in making films with ghosts, aliens and other supernatural forces in keeping with the events of the era. In 'the shining', people believed that Danny had been seeing ghosts, and that he had been born with the gift of the shining, 'you shine on, harder than anyone I've ever met.' The chef, the man who said that to Danny, also had the shining. However Danny's dad, jack was like scrooge as they both denied the experience of the ghosts 'nothing there, not a thing.' This is because they were too scared of the implications if the ghosts really did exist. After reading the two novels I have learnt that people are influenced by the social, cultural and historical issues of there time, that it effects the way they think about certain things. In conclusion, people are more likely to believe things if the social, cultural and historical issues making it feel more real to them. By Carla Novak ...read more.