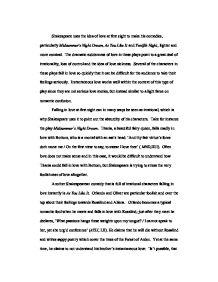 The concept of love at first sight in Shakespeare's comedies.

Shakespeare uses the idea of love at first sight to make his comedies, particularly Midsummer's Night Dream, As You Like It and Twelfth Night, lighter and more comical. The dramatic suddenness of love in these plays point to a great deal of irrationality, loss of control and the idea of love sickness. Several of the characters in these plays fall in love so quickly that it can be difficult for the audience to take their feelings seriously. Instantaneous love works well within the context of this type of play since they are not serious love stories, but instead similar to a light farce on romantic confusion. Falling in love at first sight can in many ways be seen as irrational, which is why Shakespeare uses it to point out the absurdity of his characters. Take for instance the play Midsummer's Night Dream. Titania, a beautiful fairy queen, falls madly in love with Bottom, who is a mortal with an a*s's head: 'And thy fair virtue's force doth move me / On the first view to say, to swear I love thee' ( MND,III.I). Often love does not make sense and in this case, it would be difficult to understand how Titania could fall in love with Bottom, but Shakespeare is trying to stress the very foolishness of love altogether. Another Shakespearean comedy that is full of irrational characters falling in love instantly is As You Like It. ...read more.

Shakespeare also uses the suddenness of love to point out the lack of control people often have of their emotions. Many characters in his plays seem to claim absolutely no responsibility for their emotions as well as their actions. Often times, it seems as though an external force is acting upon them, such as the case in MND, when the mortals' emotions are completely controlled by the fairies' magic love potion. At the onset of the play, both Lysander and Demetrius are deeply in love with Hermia and want nothing to do with her friend Helena. However, with a bit of the love potion on their eyes, they awaken and suddenly their love for Hermia has transferred to Helena. Lysander admits his change of heart to Helena when he awakens: Content with Heria? No, I do repent The tedious minutes I've with her have spent Not Hermia, but Helena I love; Who will not change a raven for a dove? The will of man is by his reason sway'd: And reason says you are the worthier maid. (MND, II.II) Even Titania can not control herself under the power of the potion. The love potion is an element of magic and therefore not realistic; however, in MND it represents the unpredictable and ever changing nature of love. The character Orsino in Twelfth Night is also struck by the seemingly uncontrollable emotions he feels towards Olivia at the onset of the play: 'O when mine eyes did see Olivia first... ...read more.

Therefore, love is not merely a condition, but something that needs to be cured in cases where it is not under the control of someone as logical as Rosalind. She seems to grasp the idea that untamed love can consume us and ultimately control us. Love at first sight or simply love that develops very quickly is bound to be dangerous. Rosalind understands that one should control their love rather that being controlled by their love. Her logical attitude towards romanticism can be misconstrued as being cold but are nevertheless true: 'Men have died from time to time, and worms have eaten them, but not for love' (AYLI, IV.I.91-92). Rosalind's sudden love for Orlando contrasts with Shakespeare's other love struck characters in that it is logical and controlled. While love is clearly a central theme running through most of Shakespeare's plays, it is important to look at what kind of love it is. In A Midsummer's Night Dream, As You Like It, and Twelfth Night, the true love that is depicted in Romeo and Juliet is hard to find. Most of the love is irrational, selfish or beyond control of the lovers. This is part of the reason that these plays are light and fun. Shakespeare uses the idea of instantaneous love to emphasize the ridiculousness of the lovers in his plays. The concept of love at first sight in Shakespeare's comedies. Ellen Davellis Shakespearean Comedies 29 March 2004 ID # 03121755 ...read more.