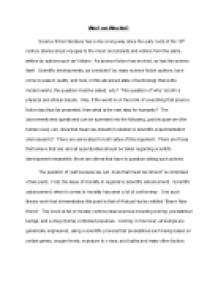 The Dangers of Science - &quot;Brave New World&quot; as a warning.

﻿Why? not Why Not? Science fiction literature has come a long way since the early roots of the 18th century stories about voyages to the moon and planets and visitors from the same, written by authors such as Voltaire. As science fiction has evolved, so has the science itself. Scientific developments, as ?predicted? by many science fiction authors, have come to pass in reality; and now, in this advanced state of technology that is the modern world, the question must be asked, why? This question of ?why? is both a physical and ethical debate. Also, if the world is on the brink of everything that science fiction has thus far presented, then what is the next step for humanity? The abovementioned questioned can be surmised into the following, just because we (the human race) can, does that mean we should (in relation to scientific experimentation and research)? There are advocates for both sides of this argument. There are those that believe that any and all opportunities should be taken regarding scientific development meanwhile, there are others that have to question taking such actions. The question of ?just because we can, does that mean we should? is comprised of two parts. First, the issue of morality in regards to scientific advancement. Scientific advancement, when it comes to morality has seen a lot of controversy. One such literary work that demonstrates this point is that of Aldous Huxley entitled ?Brave New World?. ...read more.

The moral battle between religious ideology and scientific methodology rages on; personal choice, advancement, the greater good, etc. all coming together in a explosion of ideas and reasons, with no end in sight. So, in the moral sense of being, just because we can, does that mean we should? Secondly, the physical nature of ?just because we can, does that mean we should? comes into play. In this advanced state of technology in which we live, cybernetics, artificial intelligence, and the like, transhumanism is not too far off. Transhuman is a state of being following post humanity and has been the source of inspiration for writers and film makers alike. Take, for example, the short story, ?2064, or Thereabouts?. The setting is a place full of the nonorganic, plastic and machine, the beings of the world containing as little mortal parts as possible due to the addition of mechanical components that function more efficiently. In today?s society, there is a group known as the World?s Transhumanist Society, seeking every opportunity to move towards this goal of mechanical bodies. The author of ?Better than Human?, John Coleman writes, ?They ?yearn to reach intellectual heights as far above any current human genius as humans are above other primates; to be resistant to disease and impervious to aging; to have unlimited youth and vigor; to exercise control over their own desires, moods, and mental states.? And no method of advancement?chemical, digital, molecular, or robotic?is outside the realm of reasonable discussion.? (Coleman 3) ...read more.

So, in the physical sense of being, just because we can, does that mean we should? The critics have provided a plethora of information regarding the moral and physical implications of a highly evolved, technologically advanced society. I feel that Coleman poses an excellent point when he states, ?The movement, in total, is a process where the process (improvement, immortality, ascension) is the purpose. There is rarely a ?why??; there is only ?why not?? (Coleman 9) I feel that the question of ?why?? must be asked more often than ?why not?? because often times the proponents for extreme scientific advancement attempt to power through life, not stopping to wonder the repercussions of their actions. From the evidence that I have gathered, I believe that just because we can, doesn?t mean we should. Morally, there are many issues and dangers with the experimentation and research that would ?better? society. For example, cloning is unnatural and drugs are used to correct bad behavior instead of discipline. Things are the way they are for a reason, whether it is of divine design or of natural causes. Physically, there are also many issues and dangers concerning advanced robotics and artificial intelligence. For example, when humans cease to be the highest rung on the evolutionary ladder, mankind is doomed to fall and be on a lesser plane of existence than our robotic overlords. Also, advanced weaponry will undoubtedly lead to more devastating wars that could in fact endanger the entire planet. Ask yourself, ?why?? not ?why not?? and the answers you discover will be much different. ...read more.