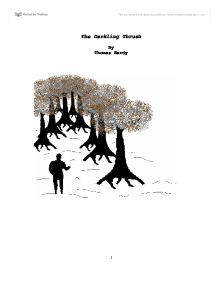 The Darkling Thrush By Thomas Hardy

The Darkling Thrush By Thomas Hardy A Centennial Desperation With a fleeting look, The Darkling Thrush appears to be the standard, depressing narrative of a lost and disenchanted poet. Formally, the particulars of the poem are well defined, consisting of four octaves, every stanza including two quatrains in hymn measure. The poem's author, Thomas Hardy, was an English poet, novelist, and architect, whose work often reflected his own enduring and apathetic pessimism, as well as an awareness of misfortune and disaster among human existence. The Darkling Thrush is no different. Through a combination of figurative language, pessimistic metaphors, and depressing similes, Thomas Hardy employs the poetic mechanism of imagery to illustrate a desperate and unpromising centennial change. The poem begins with a plethora of dark and dismal images. Hardy, who is presumed to be the narrative author, "leant upon a coppice gate", the winter's frost was a ghostly gray, which indicates a more dismal and dreary condition then that of pure, white frost. Hardy continues to describe the gloomy scene by illustrating that, as daylight drifted away because of winter deposits, The tangled bine-stems scored the sky Like strings of broken lyres And all mankind that haunted nigh Had sought their household fire Here, Hardy addresses two things. ...read more.

The turn of the century, for the speaker, signals the point in which time will stop. Without relent, Hardy concludes his description of the condition in which he exists in by saying, The ancient pulse of germ and birth Was shrunken hard and dry, And every spirit upon earth Seemed fervourless as I Two things are particularly interesting about the imagery Hardy uses in the finale of the second octave. First, Hardy had particular reason for using the words, "ancient pulse of germ and birth." When reading the words pulse and birth, the image of the pulse of a heart comes to mind, symbolizing the rhythm of life. However, pulse also has an agricultural connotation, as does the word germ. Pulse and germ, or germination, in terms of agriculture, refers to cycles of pods, which refers to resurgence, renewal, and new life. Hardy then states that this 'renewal of life' was shrunken hard and dry, indicating its death. This coincides perfectly with Hardy's idea that the turn of the century signals the point in which time will stop, and that no 'renewal of life' is foreseeable. ...read more.

The forth and final octave of the poem illustrates a conflict in the mental state of Hardy. Although the song of the thrush has not convinced him that the dismal condition of the world is imaginary, it has caused him to "think." The winter earth still leaves "little cause for carolings", and Hardy still remains on the deathbed of an old century. Furthermore, the fact that the "blessed Hope" is a positive awareness the bird has and of which he is unaware, instills a final sense of despair upon the conclusion of the poem. Immersing "The Darkling Thrush" in a lifeless setting, absent of all but one moment of optimistic existence, Thomas Hardy intertwines a combination of figurative language, pessimistic metaphors, and depressing similes into his work, providing a foundation of depressing and miserable emotions for his very existence. Even when Hardy captures a glimpse of exuberance from an aged, frail, and gaunt thrush, he asserts that his personal difficulties expel him from the possibilities of knowing hope. As all indications of hope diminished with "the weakening eye of the day", Thomas Hardy employed the poetic mechanism of imagery to illustrate a desperate and unpromising centennial 1 ...read more.