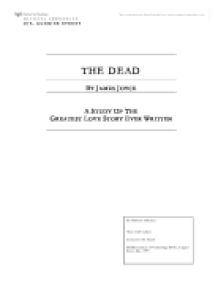 The Dead By James Joyce

MICHAEL ARRHENIUS DIT, AUNGIER STREET THE DEAD BY JAMES JOYCE A STUDY OF THE GREATEST LOVE STORY EVER WRITTEN INTRODUCTION The Dead - The greatest love story ever written! How can that be? Is it really true that measly 35 pages can be looked upon as greater than the great love stories we so often talk about, like Romeo & Juliet, Deidre & Naisi, or nowadays even Titanic? I was intrigued by that question and I wanted to read The Dead, then see it and then read it again, just to see what it is that makes this such a great love story. I was stunned, amused and finally glad for what the story showed me. It's the first time that I've ever read anything of Mr. James Joyce but the feeling that The Dead left me with will live on in me and make me pick up more of his famous works. JAMES JOYCE James Augustus Aloysius Joyce was born on the 2nd of February in 1882. He was born at 41 Brighton Square in the Dublin suburb of Rathgar. He was the oldest of 10 children and while growing up the family was never a stranger to poverty and they experienced a severe economic and social disadvantage. ...read more.

Even though the topic is touched upon a couple of times in the story, the essence of it all is not shown until the true ending of it all. This is what makes it so great. It got two stories in one, one of friendship and love and getting along with your friends and family and then another, real heartbreaking story about love that can't be. The kind of love that you know can never be and that will always stay unrealised. THE MAIN CHARACTERS GABRIEL CONROY A respected man in his late 40's/early 50's, married to Gretta Conroy. Gabriel is writing for a newspaper, The Daily Express, which by some people really doesn't qualifies as being a writer. He is the one who has the led seat at the dinner table and therefor in charge of the carving of the goose, as well as for the speech to praise the hosts. Gabriel is a really intriguing man because he seems so secure and sure of himself. But really it shows that he is a little insecure about his speech, which he is constantly going over and over again and being nervous about. One could also state that Gabriel is somewhat unsure of his love to Gretta, or rather her love for him. ...read more.

CLOSING COMMENTS & FAVOURITE QUOTE I must say that I really enjoyed the story and that I'm really glad that I got a chance to finally read it. I had no knowledge of James Joyce from before and I must say that I really find it a compelling and exciting story that really just pulls you in. As well as I was intrigued by the story itself, especially the love story, I was also amazed that James Joyce could write it in such a clear and well-painted matter, describing the relationships between the different characters and especially the mood, thought and feelings of Gabriel Conroy, a very complex but yet sincere man. As for James Joyce and the majesty of his writing, I'm sure that I will read another one of his books in the near future. The Dead and the Dubliners gave me a nice introduction to James Joyce and I would like to explore this some more. Hopefully, I will make an attempt at reading Ulysses, which is really one of my new goals in life. Now all that is left is my favourite quote from the story. Well, nothing says it better in my point of view than the words of Mr. Gabriel Conroy: "Better pass boldly into that other world, in full glory of some passion, than fade and wither dismally with age" ?? ?? (footnote continued) ?? ?? 2 1 2 1 ...read more.