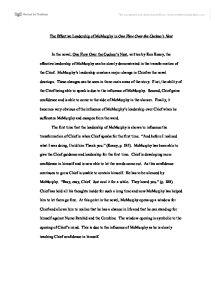 McMurphy's personality and style appear to be absorbed into the Chief. "So I picked him off and threw him in the shower. He was full of tubes: he didn't weigh more'n ten or fifteen pounds." (p. 231). These words spoken by Chief is evidence of his strength that he has regained. Prior to the arrival of McMurphy, Chief felt small and weak. Due to McMurphy's leadership, Chief now clearly demonstrates his transformation from a weak character to one who has the confidence to lift another man into the shower as if he were only ten or fifteen pounds in weight. Finally, there is evidence of the effectivness of McMurphy's leadership on the transformation of the Chief when Chief suffocates McMurphy and escapes from the ward. It is at this point in the novel that Chief has completely transformed into a different person. "The big, hard body had a tough grip on life. It fought a long time against having it taken away, flailing and thrashing around so much I finally had to lie full length on top of it and scissor the kicking legs with mine while I mashed the pillow into the face." ...read more.

189). Chief escapes from the ward, and like McMurphy, is now free. "I felt like I was flying. Free. Nobody bothers coming after an AWOL, I knew, and Scanlon could handle any questions about the dead man-no need to be running like this. But I didn't stop. I ran for miles before I stopped..." (p. 272). McMurphy was able to give the Chief the courage and strength to find his freedom. Throughout the novel, One Flew Over the Cuckoo's Nest, the leadership by McMurphy has been clearly shown in the transformation of the Chief. Chief has grown from a small, weak and silent man to a man who is strong and confident. McMurphy helped Chief break his silence. Also, Chief showed confidence and strength when he came to McMurphy's aide in the shower. Finally, at the end of the novel, Chief kills McMurphy and escapes. It is at this point that Chief has become a strong, confident character. This can be attributed to the leadership and teaching by McMurphy. The last line of the novel demonstrates clearly that McMurphy has made a change in Chief. "I been away a long time." (p. 272). Chief has been able to find himself once again. ...read more.