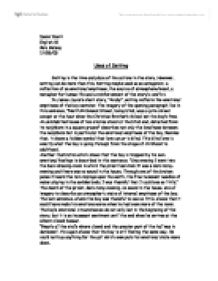 The emotional emptiness in &quot;Araby&quot; by James Joyce, &quot;The Chrysanthemums&quot; by John Steinbeck which uses antagonism, mood and atmosphere in &quot;The Fall of the House of Usher&quot; by Edgar Allen Poe

Daniel Koett English 10 Mrs. Galang 17/05/05 Uses of Setting Setting is the time and place of the actions in the story. However, setting can be more than this. Setting maybe used as an antagonist, a reflection of an emotional emptiness, the source of atmosphere/mood, a metaphor for human life and a reinforcement of the story's conflict. In James Joyce's short story, "Araby", setting reflects the emotional emptiness of the boy narrator. The imagery of the opening paragraph like in this sentence, "North Richmond Street, being blind, was a quite street except at the hour when the Christian Brother's School set the boy's free. An uninhabited house of two stories stood at the blind end, detached from its neighbors in a square ground" describes not only the loneliness between the neighbors but in particular the emotional emptiness of the boy. Besides that, it shows a hidden symbol that love can or is blind. This blind love is exactly what the boy is going through from the stage of childhood to adulthood. Another illustration which shows that the boy is trapped by his own emotional feelings is described in this sentence: "One evening I went into the back drawing-room in which the priest had died. It was a dark rainy-evening and there was no sound in the house. Through one of the broken panes I heard the rain impinge upon the earth, the fine incessant needles of water playing in the sodden beds. ...read more.

These all contribute to the mood which makes up the atmosphere of the story. Edgar Allen Poe uses the narrator to describe the house so that the reader feels how dark and evil this place must be. In the story "The Blind Man" written by D. H. Lawrence, setting is used as a source to reinforce the conflict of the story. The author uses imagery as an element to show the conflict to the readers. The relationship of Maurice and Isabel has begun to break down on Maurice's dependency on her, an entirely reasonable one given the circumstances. When Maurice, while upstairs changing, hears Isabel and Bertie talking and feels "a childish sense of desolation"; he "seemed shut out...like a child that is left out." But there is more to it than that, for it is clearly a feeling of dependency, which reinforces the conflict, rather than jealousy that distresses him: "He had almost a childish nostalgia to be included in the life circle. And at the same time he was a man, dark and powerful and infuriated by his own weakness. By some fatal flaw, he could not be by himself, he had to depend on the support of another. And this very dependence enraged him." Another perspective to look at the reinforcing of conflict is the house of Maurice. Even though he is blind, he still knows his surroundings, "He seemed to know the presence of objects before he touched them. ...read more.

The rocking horse represents both Paul's desire to make money for his mother and his own sexuality. In a sense, one can guess that Paul compensates for his mother's immaturity by masturbating: "...he would sit on his big rocking horse, charging madly into space, with a frenzy that made the little girls peer at him uneasily...his eyes had a strange glare in them" Paul's masturbatory activities are equally useless as well. No matter how much money he wins for his mother, she is never satisfied. More to the point, Paul's money can not buy his mother's love. All in all, setting is not only the time and place of a story but it can be sometimes an essential part of the story. The emotional emptiness in "Araby" by James Joyce, "The Chrysanthemums" by John Steinbeck which uses antagonism, mood and atmosphere in "The Fall of the House of Usher" by Edgar Allen Poe, reinforcement of the conflict in "The Blind Man" and "The Rocking Horse Winner" which is a metaphor for human life. All 5 are good examples of how setting plays an important and different role in a story. The setting of a story helps to outline the general theme. It may even be an important symbol or help develop symbolism. Setting may also able a reader to relate to hardships or situations in real life. This helps the story to become more powerful and complex. The settings used in the 5 stories above were the foundations of success in these works. ...read more.