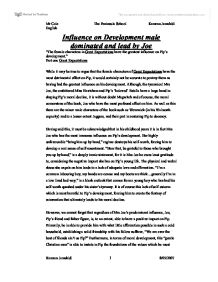 Influence on Development male dominated and lead by Joe "The female characters in Great Expectations have the greatest influence on Pip's development." Part one Great Expectations While it may be true to argue that the female characters of Great Expectations have the most detrimental effect on Pip, it would certainly not be accurate to portray them as having had the greatest influence on his development. Although, the tyrannical Mrs Joe, the embittered Miss Havisham and Pip's 'beloved' Estella have a large hand in shaping Pip's moral decline, it is without doubt Magwitch and of course, the moral cornerstone of the book, Joe who have the most profound effect on him. As well as this there are the minor male characters of the book such as Wemmick (in his Walworth capacity) and to a lesser extent Jaggers, and their part in restoring Pip to decency. Having said this, it must be acknowledged that in his childhood years it is in fact Mrs Joe who has the most immense influence on Pip's development. ...read more.

and the importance of honesty through "(telling lies) ain't the way to get out of being common." Hence Joe is able to have some effect on Pip in his childhood years. Once exposed to the world of Satis house it is the influence of Miss Havisham and Estella that largely occupies his life during the 'expectation' years. We see the manner in which Miss Havisham plays further on his lack of self-worth, using Estella to belittle him and "break his heart"; "He's a coarse and common labouring boy." This lack of self-worth combines with the glamour of their lifestyle which mesmerizes Pip and leads him to create the fantasy of reinvention. It is the initial meeting at Satis house, therefore, that consequently sees Pip commence his deluded journey in the pursuit of false ideals. Estella also becomes a major contributor to this fantasy, as Pip is naively led on by her and is blinded by her beauty, failing to realize what truly lies beneath. ...read more.

Pip suffers from a mystery illness which is highly symbolic of a phase of personal disassembly, in which he questions himself and rebuilds his character. It is Joe who appears as the saviour, nursing him back to health and in the process teaching Pip that true gentility comes only with qualities such as humility, honesty and most importantly the ability to love and be loved. "God bless this gentle Christian man," is a defining moment in Pip's development as he is finally able to recognise Joe's nobility. Thus without doubt we are left to see that it is the male character Joe who has the most intense influence on Pip's character. It is clear to see therefore that it is instead although the female characters do have quite a detrimental effect on Pip's development, it is instead the male characters and lead by Joe who have the greatest influence. In particular these male characters have quite a substantial hand in helping Pip re-establish his moral decency and hence redeem himself in the eyes of the reader. Mr Cole The Peninsula School Kamran Jamshidi English Kamran Jamshidi 1 8/05/2007 ...read more.