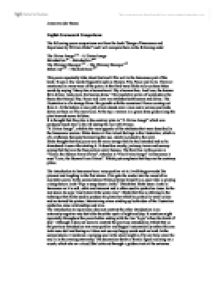 The following poem comparisons are from the book &quot;Songs of Innocence and Experience by William Blake&quot;.

English Coursework Comparisons: The following poem comparisons are from the book "Songs of Innocence and Experience by William Blake" and I will compare them in the following order: The Divine Image p18 - A Divine Image Introduction p4 - Introduction p30 The Chimney Sweeper p13 - The Chimney Sweeper p37 Infant Joy p25 - The Sick Rose p39 This poem repeatedly talks about God and it fits well in the Innocence part of the book. It uses a few words frequently such as Money, Pity, Peace and Love. They are mentioned in every verse of the poem. In the third verse Blake tells us about these words by saying 'Mercy has a human heart. Pity a human face. And love, the human form divine. And peace, the human dress.' This repetetive series of words show the theme that Mercy, Pity, Peace and Love are attributes both human and divine. The illustration is of a strange flame like growth with the occasional flower coming out from it. At the bottom a man with a halo stands over a man and a woman and looks down on them as if he were God. ...read more.

The introduction to experience does not contrast the other introduction in an extremely negative way but talks about the cycle of night and day. It mentions night repeatedly throughout the poem before ending with the line 'Is giv'n thee the break of day.' Although it does not seem to contrast the previous introduction I think that as the previous introduction was very positive and happy it automatically makes this one look more dull and boring as it does not use any happy words such as lamb. In the second stanza it mentions a weeping soul in the starry night as if to say how alone the soul is in the evening starry sky. The decoration shows a female figure reclining on a couch, which sits on a cloud. She looks out through a golden circle at the universe. The first 'The Chimney Sweeper' is unusually long for one of Blake's poems and at first glance does not seem to fit in the Innocence part but on close inspection it is against the shameful use of using small boys to sweep chimneys. ...read more.

It is very innocent and peaceful with a very colourful illustration. Key words from this poem include joy and sweet. They are repeatedly mentioned which makes the reader think more about the innocent child. The decoration has a very curvy flower perhaps a tulip, which has on one stem an unopened bud, which is used to represent an unimpregnated womb. The open flower above is the impregnated womb with small baby lying on the mothers lap. Instead of comparing this poem with plate 48 'Infant Sorrow' I chose plate 39 'The Sick Rose'. This plate represents the struggle of love with the red rose representing love and the worm as the intervening silent love breaker. The reason the rose is portrayed as sick is that in the illustration a caterpillar is eating away at its leaves in the top left hand corner. In the illustration the rose has many sharp thorns sticking out along the whole length of the stem, which emphasize the pains of love on Earth. However in 'Infant Joy' the stem is extremely windy without any thorns. I think that 'The sick rose' belongs in experience as it depicts pain and suffering by using images of thorns and of an invisible worm which destroy the life of the rose. James van der Hoorn ...read more.