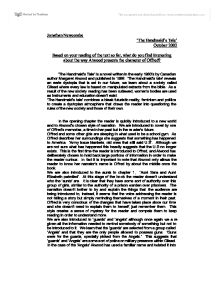 'The Handmaid's Tale' - Based on your reading of the text so far, what do you find interesting about the way Atwood presents the character of Offred?

Jonathan Newcombe 'The Handmaid's Tale' October 2002 Based on your reading of the text so far, what do you find interesting about the way Atwood presents the character of Offred? 'The Handmaid's Tale' is a novel written in the early 1980's by Canadian author Margaret Atwood and published in 1986. 'The Handmaid's tale' reveals an eerie dystopia that is set in our future, we learn about a society called Gilead where every law is based on manipulated extracts from the bible. As a result of the new society reading has been outlawed, women's bodies are used as instruments and education doesn't exist. 'The Handmaid's tale' combines a bleak futuristic reality, feminism and politics to create a dystopian atmosphere that draws the reader into questioning the rules of the new society and those of their own. In the opening chapter the reader is quickly introduced to a new world and to Atwood's chosen style of narration. We are introduced to novel by one of Offred's memories, a time in her past but in the reader's future. Offred and some other girls are sleeping in what used to be a school gym. As Offred describes her surroundings she suggests that something has happened to America. 'Army issue blankets, old ones that still said U.S'. Although we are not sure what has happened this heavily suggests that the U.S no longer exists. This is the first time the reader is introduced to Offred, and Atwood has deliberately chosen to hold back large portions of information in order to make the reader curious. In fact it is important to note that Atwood only allows the reader to know her narrator's name is Offred by about the middle once the book. We are also introduced to the aunts in chapter 1, 'Aunt Sara and Aunt Elizabeth patrolled'. At this stage of the book the reader doesn't understand who the 'aunts' are. ...read more.

It is not clear whether or not the commander's wife is referring to Offred's bag or to Offred. Atwood has presented the implication that the Serena Joy sees Offred as a thing, or a tool. Serena Joy is clearly playing a power game with Offred and is attempting to set her in her place. In chapter four the reader is introduced to Nick. This is the first time the reader and also the first time Offred have come across Nick. Atwood uses Offred's first impressions to tell the reader about Nick without revealing too much. 'I think of how he might smell.' Offred is looking very closely at Nick and my impression is that she is attracted to him. Nick notices Offred looking at him and he winks at her. In my opinion Nick's wink has mirrored Offred's feelings of attraction, only far more blatantly. I think that Atwood has used this approach to show a mutual attraction between both of them and it also allowed her to show the reader that Nick is different from most men in Gilead. Throughout the novel there is a theme of s****l tension. Offred purposely acts provocatively when she is walking away from a checkpoint at the end of chapter four. Offred explains that the guards 'will suffer, later, at night' because 'they have no outlets now except themselves, and that's a sacrilege.' Offred is teasing the guards; she knows about their situation and exploits it for her own fun. This shows Offred's slightly rebellious side, and it also demonstrates that she has some power through being provocative. I think Atwood's aim is to communicate that Offred is still human and that she hasn't accepted her role within Gilead. Atwood has also communicated the power women could have in this community if men didn't run it. Towards the end of chapter five some Japanese tourists approach Offred and Ofglen. ...read more.

She knows that voicing her opinions would not achieve anything and even though she wants to rebel and wants to resist she can't find a safe way of doing it. Offred copes by gaining courage from all sorts of different sources, her memories of her daughter, of Luke and of Moira, the writing in the cupboard and her hatred for her situation. Her situations constantly develop and change over the course of the novel, but one thing remains consistent. If she wants to survive she has to have a baby. The ways the situations develop are extraordinarily gripping, there isn't any real action but the more the reader reads the more they start to feel for Offred. We see Offred go from wanting to kill herself to devoting her energies to surviving and coping until she finds a way to get out. Some readers may disagree with me and claim that she is stuck in a rut and that she is just accepting it but I think the text suggests that the last thing she's done is accepted it - she's just trying to survive. I think that Atwood's narrative technique is very clever. By using a first person narrative Atwood has allowed the reader to really get to know Offred. The reader also learns about some of the things that happened and how society has changed, but only ever in very small parts of information. This method keeps the reader intrigued and makes the author want to read on in order to find out more. The use of symbolism in the flowers is also very well used, some people may question whether or not the flowers are necessary but I think they allow Atwood to communicate certain things to the reader that otherwise may have been too blatant and interrupted the rhythm of the text. However I am not a fan of Atwood's dialogue. It never seems real to me, just two people exchanging dull facts, maybe that's the way conversations are in Gilead but in other novels dialogue is usually an important way of creating characters. ...read more.