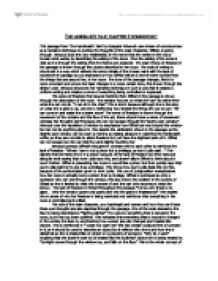 The handmaid's tale: chapter 2 commentary This passage from `The Handmaid's Tale' by Margaret Attwood uses stream of consciousness as a narrative technique to portray the thoughts of the main character, Offred, is going through. Attwood does this very realistically; in the sense that she writes in the way a human mind works, by describing the setting of the room. Thus the setting of the room is vital as it is through the setting that the themes are explored. The main theme of freedom in the passage is shown through the objects described in her room. The style of writing is structured in a way which reflects the minor details of the human mind with the lack of movement in passage to put emphasize on how Offred refuse to let her mine wonder from the things that are around her, in her room. The tone of the passage changes, first it is more uncertain and unsure but later changes to a more certain tone, this shown through the diction used. Attwood structures her narrative technique in such a way that it creates a uniform setting and creates a sense of everything being controlled or repressed. The sense of freedom that Atwood restricts from Offred in the passage is shown through the description of the room. The narrator focuses on what she `can' do rather then what she can not do. ...read more.

The role of the main character, as a handmaid and women and how they can't have there own thoughts are also depicted through the passage. One of the main elements, the floor is being described as "highly polished" The wood is something that is natural in the room, but it has too been polished. This indicates that everything that is natural is changed in the society she lives in, emphasizing how women are also changed and treated like objects. This is reinforced in " waste not want not" this has certain subdued hint of cynicism in it, as it should be used to describe an object but it reflects who she is and how she is detached as she is treated like an object or a property of someone. "Why do I want" Implying that she doesn't want to be treated like the `polished' object she is being treated as. "Sunlight comes through the window too, and falls on the floor" This is the whole concept of something welcoming entering through the window, yet it doesn't fall on her but on the floor. Attwood is trying to portray how everything just bypasses Offred and ignores her, which symbolizes how everyone ignores or bypasses Offred. The role of Offred is also hinted throughout the passage. Attwood uses the repetition of "white" to do this. White symbolizes something which is pure, which can also mean being virgin, which shows how the women role in the book has a s****l aspect to it. ...read more.

a more detached, uncertain tone of what she can do or rather not do which leads to the hint of sarcasm and the tone of being more confident and certain about something. The repression is also stressed through the use of the character, Aunt Lydia who has an authoritative voice and tries to control the thoughts. "Think of it as being in a army" and "where I am is not a person but a privilege, as Aunt Lydia said," Attwood first uses the imperative tense to show the power and control that the Aunt has, she also makes what Aunt Lydia says seem like a chant and by using the comma to separate what is said with Aunt Lydia she emphasizes this is what "Aunt Lydia said" and not what she thinks. The passage from `The handmaid's tale' by Margaret Attwood focuses on the setting of the room which is shown as a symbol of her capture. The theme of turning something bad into something good is explored all throughout the passage. This is shown through juxtaposition, "braided rags" Attwood portrays turning rags into something beautiful which is what she is trying to create throughout the passage by restricting the thoughts of Offred, so that her thoughts don't wander away. The beginning of the passage shows a more uncertain tone, where the thoughts are more restricted but towards the end of the passage the tone is changed to a more cynical tone which implies more of her thoughts. ...read more.