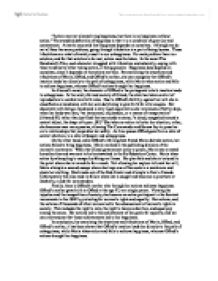 The Handmaid's Tale - study of the character Offred.

"Action may not always bring happiness, but there is no happiness without action." The standard definition of happiness is that it is a condition of great joy and contentment. Aristotle once said that happiness depends on ourselves. Although we do not all face the same problems, going through tribulation is a part of being human. These tribulations are what ultimately result in our unhappiness. For each problem there is a solution, and for that solution to be met, action must be taken. In the novel The Handmaid's Tale, each character struggled with tribulation and adversity, coping with these troubles by either taking action, or being passive. ...read more.

rather than just flesh that surrounds a uterus, "a cloud, congealed around a central object, the shape of a pear. (91)" She takes no action to better her situation, rather, she becomes even more passive, allowing The Commander and Serena Joy to press her on to relationships that jeopardize her safety. As time passes Offred goes from a state of scilent rebellion, to a state of despair and unhappiness. On the other hand, while Offred's life long best friend Moria did take action, her actions failed to bring happiness. Moria worked in the publishing division of the women's movement. When the Gilead government came to power, Moria was arrested by authorities and was sent to be brainwashed in the Re-Education Center. ...read more.

Viewing the injustice and the inequalities of society, she became an active participant in the feminist movements in the 1960's, protesting for women's rights and equality. Her actions, and the actions of thousands of other women led to the advancement of women's rights in society. This includes the right to vote, the right to have an abortion, and equal pay among the sexes. Her actions led to the achievement of her goals for equality, and we can only assume that these achievements led to her happiness. In conclusion, by examining the situations and tribulations of Moria, Offred, and Offred's mother, it has been shown that Offred's inaction leads her directly to the path of unhappiness, while Moria takes action and fails to achieve happiness, whereas Offred's actions brought her happiness. ...read more.