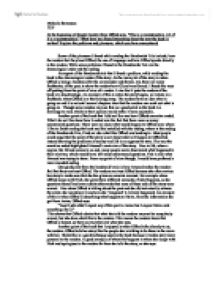 The Handmaids Tale - At the beginning of chapter twenty-three Offred says, &quot;This is a reconstruction. All of it is a reconstruction.&quot; What have you found interesting about the way the book is written? Explore the problems and pleasures, which you have enc

At the beginning of chapter twenty-three Offred says, "This is a reconstruction. All of it is a reconstruction." What have you found interesting about the way the book is written? Explore the problems and pleasures, which you have encountered. Some of the pleasures I found while reading the Handmaids Tale include, how the readers feel they trust Offred, the use of language and how Offred speaks directly to the readers. While some problems I found in the Handmaids Tale are the chronological order and the ending. An aspect of the Handmaids tale that I found a problem, while reading the book is the chronological order of the story. As the main plot of the story is when Offred is being a handmaid for the commander and Serena Joy, there are many flashbacks, of the past, to show the readers how Gilead was formed. I found this very off-putting from the point of view of a reader. ...read more.

The way the narrative ended highlighted Atwood's main aim of the story. Also in life, when a regime like Gilead comes to an end, many people never discovered what happened to their relatives, which would have left many unanswered questions. This is also what Atwood was trying to show. From my point of view though, I would have preferred a more rounded ending. One good point from the handmaid's tale is how Atwood makes the readers feel that they can trust Offred. The readers can trust Offred because she often revises her story to make sure that she has given an accurate account. For example when Offred sleeps with Nick, she gives three different accounts of what happens, as she questions herself and even admits afterwards that none of these side of the story were correct. Also when Offred is talking about the past and she did not actually witness the event, she would say it was how she 'imagined' it, to have happened. ...read more.

I'm sorry it's in fragments..." This proves to the readers that Offred considers them, when she is telling her story. The Handmaids Tale is very good at the use of language. This is shown in the way Offred likes to play word games. This is shown best when Offred is playing scrabble with the commander. Another example of this would be the use of palimpsests, used throughout the book. An example of a palimpsest is in the first chapter. Some readers may argue that it is a palimpsest for the whole ideology of Gilead. I like it because I think it shows that nothing in Gilead is new, which I feel it is very important for setting the scene for the story. In conclusion there are many pleasures and problems that I have found while reading the handmaids tale. Some other readers though may disagree and find the problems that I described part of what they enjoyed about the novel. Michelle Stevenson 12JP ...read more.